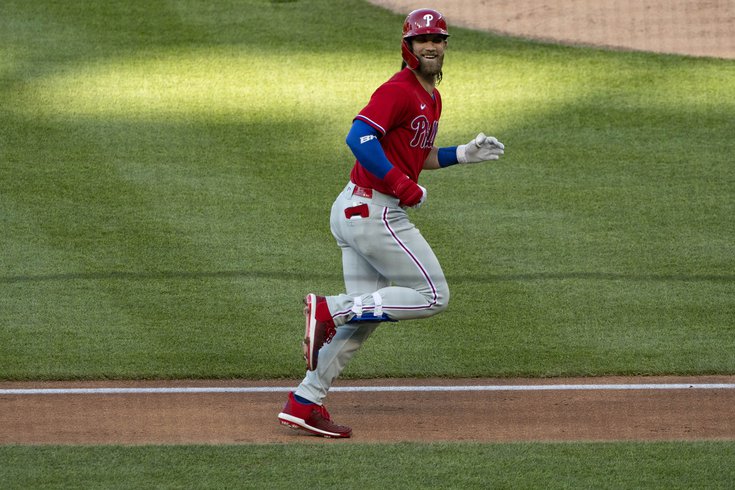 Philadelphia Phillies right fielder Bryce Harper looks to the bench after after hitting a three-run home run during an exhibition game at Nationals Park.

The man is going to be here for a while and has had no issue settling in. Harper has gone to great lengths to embrace the fans — successfully, might I add — and is now throwing his hat in the GM ring. As one of those aforementioned fans, I couldn’t be happier.

The latest came on Twitch, where Harper was pretty outspoken about having Spencer Howard on the team by Game 6 in New York. He’s brought up other issues as well, like re-signing JT Realmuto. And that has clearly been Harper at his loudest, supporting a teammate and echoing what a lot of us want to see: the Phillies NOT losing the league’s best catcher.

Before you jump all over Harper for overstepping his boundaries, let’s look at a couple of important factors. First, do you even trust — let alone believe in — the power of the current GM? The man was pretty much emasculated during the final presser last year, as we learned the owner will be involved in far more personnel decisions. It gave little hope to me that Matt Klentak has a true plan that can be executed with him at the helm. He was essentially given a lot of help heading into this year.

Having a player – a veteran with MVP ability – truly invested in the team like Harper is a fantastic thing. It’s far from someone who is regretting his decision, nor having second thoughts on the team or city. General managers make mistakes, all the time. This city is no stranger to really bad ones. Getting insight from someone like your best player on who to sign or trade for is a positive.

It takes a truly confident and intelligent person to ask for help, especially this type of help. But we see this happening in other sports, the only difference here is the lack of emphasis on the individual athlete in MLB. If this were Joel Embiid or Carson Wentz, would we even blink an eye? I would hope not. There’s actually very little difference in Harper, Wentz, & Embiid all pushing their front office to make their respective teams better.

Some people have raised concerns about new skipper Joe Girardi and in what position he may find himself, as if he will have to balance some hostile clubhouse angry at ownership with weekly reports to Klentak, moderating two sides that despise each other. Far from it. What kind of moron would actually believe Girardi wouldn't want the best catcher on his team moving forward, and if he doesn’t, even more reason to remove him from personnel decisions like signings & trades.

No, the simplest solution is that everyone wants Realmuto back, and Harper is speaking for everyone. That includes the manager. I don’t get why there is this fear to allow players to have significant impact on who their team signs, especially if it is coming from a guy locked into a 13-year deal.

This isn’t even LeBron James acting as the GM on the Lakers or Cavs before that. It’s not Brady taking multiple pay cuts and having a huge impact on every single offensive player brought into New England. It’s a guy yelling into the camera, if it’s at the ballpark or on Twitch, for his current team to sign the best catcher in baseball. The only reason why I hope it stops is the team gets off its rear and signs Realmuto. Problem solved, until the next poor-decision-in-the-making by management.

Then we can all come together again and thank Harper for truly being a voice of the people.

Pick of the Week: Live Stream of My Marriage

Sorry, I tried. This Saturday I am beyond fortunate and lucky enough to marry my best friend and #1 supporter (yes, I have a couple of those). I tried to push for a live stream on Twitter, or at least Twitch, but maybe it’s my intro to marriage as I was shot down, rather emphatically!

The good news is I’ll be able to share some pics in next week’s column. This was beyond difficult to put together – COVID-19 has so many restraints and we are following them to a T – as I watched my bride Angela put it all together. She had help from her mom and some others, including me at one or two points, but this is a testament to how strong of a person she is. Not just to put up with me, but organizing and executing a small wedding on a lake near Scranton, she continues to amaze me.

This isn’t about complaining, far from it. Our country has been decimated by this virus and we have all been impacted in many ways. We all know someone who had it or even worse might have succumbed to it. We continue to live our lives as best we can, knowing there are new protocols in place, and “normal” may not ever truly return.

We counter it with perseverance. It’s revealed in humanity when we create a positive out of a negative. My sister gave birth last month to a healthy baby girl, and while I won’t see her in the near future, it’s a blessing that continues to show how we push through during crazy times.

If it’s not you, then find someone close to you, someone who has done something special during this quarantine. Remind them about how strong they are to get through this climate and still create something wonderful.