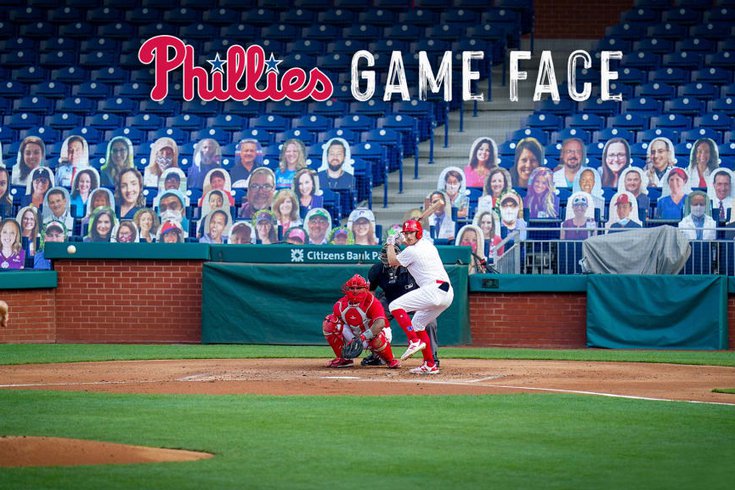 The Philadelphia Phillies' "Game Face" program will give fans the opportunity to have their photos affixed to seats at Citizens Bank Park during the 2020 season. The proceeds will support Phillies Charities.

The Philadelphia Phillies are gearing up for Friday's home opener at Citizens Bank Park, where a surreal experience with no fans will mark the start of a shortened 60-game baseball season.

As noted last week, the Phillies have chosen to liven up the empty ballpark by pumping in fake crowd noise, sending the Phillie Phanatic through the stands and affixing cardboard cutouts of fans' faces to the seats behind home plate.

The team has now released details about the process for fans to put their faces on these cardboard cutouts.

Fans can donate and submit a photo keeping the following guidelines in mind:

•Due to limitations, not all sections and rows are available for this program and we cannot accommodate seat requests. Your Phillies game face fan cutout location will be selected at random.

•While we will try our best, we can’t guarantee that all photos that are submitted together will be seated next to one another in the ballpark.

•Photos of the fan cutouts throughout the ballpark will be captured and posted. Fans will have the opportunity to view these photos, find their respective cutout(s) and tag themselves.

•At this time, fans will not be able to receive their fan photo cutouts at the end of the season; however, if that changes and it is something we are able to eventually offer to participants, we will let you know.

•The Phillies reserve the right to refuse any photos. Images that portray obscene, lewd, explicit, discriminatory, derogatory, violent, offensive, infringing or otherwise inappropriate content are strictly prohibited and will be discarded. Please read the full Terms and Conditions.

The program will start on Friday with the team honoring health care workers in the Philadelphia region. High-resolution images of doctors, nurses and staff have been sent to the Phillies and will be adhered to the park's Diamond Club seats. The images will be 18" by 36" and will feature various poses in hospital uniforms and Phillies gear.

“We are proud to honor the countless healthcare heroes who have shown extraordinary care and commitment to our community during this pandemic,” said David Buck, Phillies executive vice president. “As our broadcast cameras capture the ‘crowd’ on Nemours Opening Day, we want our doctors, nurses and healthcare workers to know that we are so grateful for their sacrifice and courage.”

A team source confirmed that Northern Liberties-based Color Reflections will be producing the cardboard cutouts.

It's also unclear how often the television broadcasts will pan over the cutouts during the course of a game, which would likely increase interest in program participation.

In the absence of any other great way to compensate for the issues presented by COVID-19, "game faces" offers a fun experiment that supports good causes.