MLB Rumors: Is help on the way for the Phillies' disastrous bullpen? 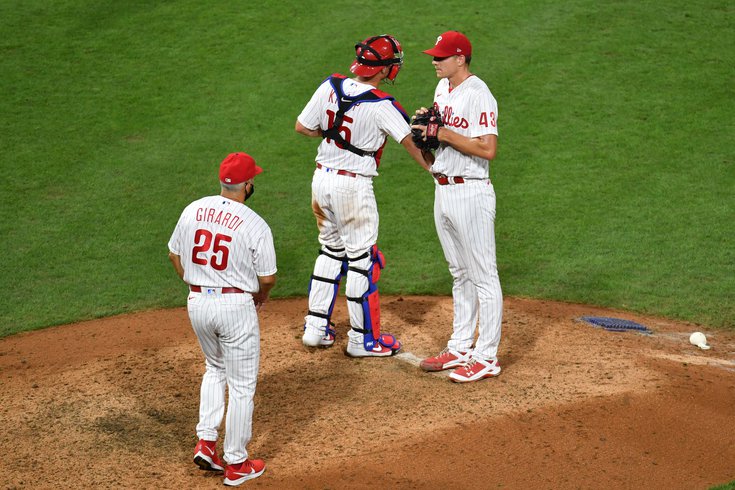 The Phillies bullpen has been nothing short of a disaster this season.

UPDATE [2:45 p.m.] — We'll get into the reasons why, and speculation as to what else the Phillies can do to address their cumbersome and wholly ineffective bullpen in just a bit, but first some breaking news of roster changes for the Phils pitching staff:

Phillies have made the following roster moves: pic.twitter.com/sC9lKshyCi

Pivetta is the biggest name here, and his remaining minor league option means he'll remain under team control and work on figuring out just why he was so bad over the last few weeks in Philly. Brogden is a hard-throwing lanky righty who has shown potential but has never made an MLB appearance at age 25. Parker pitched in 23 games for the Phils in 2019 with a 5.04 ERA.

Will this move the needle in a bullpen that is the worst in the majors by a long shot?

Aaron Nola went eight fantastic innings, striking out 10 and handing a 13-1 lead over to the Phillies bullpen Monday night.

By the time Nick Pivetta and Trevor Kelley were done, it was a 13-8 final.

Such is the state of the 2020 Phillies bullpen, which seems to be steadfastly focused on making the Phillies starting pitchers as frustrated as possible.

That's a higher ERA than any other team's bullpen ERA when *trailing.*

It's remarkable, really, that despite them blowing or nearly blowing every single game in which the 'pen appears, the Phillies are still hovering around .500 with just over 10 percent of the schedule behind them. It's also a testament to just how good everything else has been — particularly the top part of the starting rotation.

Here's the juxtaposition between the starters and the relievers through 11 games:

Yes, you read that right. The Phillies bullpen has allowed opposing hitters to hit .362 in 31 innings of work. The current makeup of the bullpen is certainly not the one the front office had planned to assemble in centerfield this season.

Well, Dominguez is getting Tommy John surgery, Arano is currently at the Phils alternate training site, Velasquez has been forced to start (and not well, at that), Suarez is on the COVID-19 injury list and Robertson is still rehabbing from surgery last year.

The Phillies decided against keeping veteran camp arms Drew Storen, Bud Norris and Francisco Liriano, and also did not make any moves for established free agents this offseason.

The bullpen fill-ins have been short of solid.

But there is potentially good news, in addition to the simple fact that the sample size is still extremely small and that having a week off during the Marlins coronavirus outbreak held the pitchers back from getting the work they needed.

Here are a few reasons for bullpen optimism:

The Phillies top prospect has been called up and is up to stay, as he made his debut on Sunday and was a little shaky — but still showed flashes of greatness. He started in a doubleheader — the Phillies will have a lot of those — so having depth at starter is important. However, Howard is currently scheduled to make his next start on the same day as Velasquez, who has allowed five runs through seven total innings across two starts. If the Phils decide to go with Howard, it allows Velasquez to assume a role change.

Velasquez has the stuff to be a really good, hard-throwing, late-inning reliever in MLB, and if Howard is able to hang onto the fifth starting job, VV could find a home in the bullpen (where he can allow the team to finally jettison ultimate disappointment Nick Pivetta).

According to reports, the $11 million reliever who has appeared in just seven games with Philly is throwing and could return to action within the month. Here's more from The Inquirer's Bob Brookover:

The biggest X-factor for the Phillies is David Robertson, a reliever who helped Girardi win a lot of games with the Yankees and a World Series in 2009. At the moment, Robertson is trying to regain arm strength by throwing at the Phillies’ spring-training site in Clearwater, Fla. He had a 22-pitch bullpen Friday and, according to a team source, is throwing all his pitches.

He expects to return and could be the best trade-deadline addition the Phillies make.

If he resembles the David Robertson who pitched for Girardi in New York, he would be just the cure this bullpen needs to make a playoff run. But it’s still fair to wonder why the Phillies did not do more when they had the opportunity during the offseason. [Inquirer.com]

Due in part to HIPAA laws and also to a lack of fluid information, Suarez' progress on his way back from his placement on the COVID-19 list is right now unknown, but assuming he is able to make a full recovery and ramp up by throwing in Lehigh Valley, Suarez could be another big August or September addition to the Phils. He can make spot starts, and also serve as a second lefty specialist to the effective Morgan in late-inning spots.

UPDATE [12:50 p.m.] — Suarez and Robertson are progressing, according to another report Tuesday:

Hearing that relievers David Robertson and Ranger Suarez are headed north from CLW to continue mound progressions. Robertson coming back from TJ surgery, Suarez from Covid protocol. Neither is ready to help yet. Need to face hitters, etc, but could help at some point this season.

In this weird, shortened season it's easy to forget that we are now just two weeks away from the 2020 trade deadline, and while expanded playoffs may create more buyers than sellers and inflate prices, the Phillies can still actively add an effective reliever before August 31. Some current candidates to be moved from bad teams include Orioles' Mychal Givens, Royals' Ian Kennedy, White Sox' Alex Colome and Pirates' Keone Kela. We'll be sure to monitor all the trade possibilities and rumors as the end of August approaches.