As the Sixers' season of limbo approaches, questions abound about how the wayward All-Star will mesh with his team 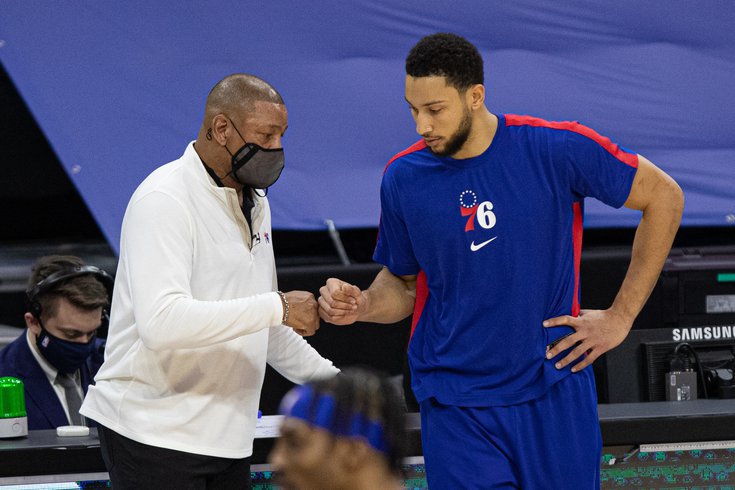 Can Ben Simmons, Doc Rivers and the rest of the Sixers organization find a way to coexist as scrutiny intensifies with the start of a new NBA season?

Ben Simmons will not play in the Sixers' preseason finale Friday against the Detroit Pistons, a question coach Doc Rivers had left open until his absence from the team shootaround made a test-run appearance unlikely.

Simmons' eventual return to the court remains as enigmatic as the overall mood since he suddenly showed up at the Wells Fargo Center during Monday's preseason win over the Brooklyn Nets.

When will Ben Simmons suit up in a Sixers uniform for the first time since the team's Game 7 playoff elimination against the Hawks in July? Wouldn't we all like to know?

The climate of uncertainty surrounding Simmons drives home the biggest consequence of his trade demand and the ensuing months-long leverage war, which finally drew him back to Philadelphia as the Sixers withheld an unrecoverable portion of his salary.

Lack of direction and a scarcity of first-hand information makes this situation ripe for the scavenging of frustrated sources, who may cough up details that ultimately damage Simmons further in exactly the ways that seem to have created this rift from the start.

An in-depth ESPN+ story from Ramona Shelburne on Friday added more fuel to the fire of Simmons' shaky confidence, revealing a stunning anecdote about a crisis that nearly kept him out of that Game 7 in Philadelphia entirely.

Hours before the finale of that Eastern Conference semifinals series against Atlanta, Simmons reportedly learned that he might miss the game due to a self-reported close contact with a team masseuse who had received an inconclusive COVID-19 test result.

The All-Star guard, who had been struggling offensively in the series, particularly in the previous two games, reportedly reached out to his brother, Sean Tribe, and several teammates to let them know his status was in doubt and he had been held out of the team's shootaround. Via Shelburne:

Several players were questioned about whether they'd seen [the masseuse] that morning, but only Simmons said that he had.

"He answered the question honestly, without thinking of the implications," says one source close to Simmons.

But according to multiple sources, many within the team questioned whether Simmons had actually seen the masseuse — or was just trying to get out of playing as he battled the basketball version of the yips. Simmons had taken just 10 shots combined in Games 5 and 6 — he'd averaged 11.6 shots a game over his career — and had missed 16 of his previous 23 free throws.  [ESPN+]

Simmons ultimately was cleared to play after his COVID-19 test came back negative, but sources told Shelburne that Simmons and the team were "thrown" by the uncertainty. The Sixers took the court that night with an ominous energy. Simmons may have been rattled by a sense of doubt among his teammates, according to the report, and the crucial dunk he passed up to tie the game with 3:35 remaining may have been rooted in hours of anxiety and tension over the situation.

Shelburne's story offers a more complete look at Simmons' uneasiness and how people close to him believe he ended up in this stand-off — not just with the Sixers, but with his own demons.

This is the type of report — specifically, the COVID-19 exposure part — that lays bare the cost of Simmons becoming this much of a distraction both to the Sixers and within the overall NBA landscape. It would be easy enough for Simmons' camp to fire back in some way, or deny the veracity of the report, if they feel it necessary, but the real damage comes from what it suggests about the reported feelings of Simmons' teammates after months of unresolved drama.

The idea that anyone close to Simmons would have even thought to question his honesty about seeing the masseuse is extremely uncomfortable to consider. It's not the kind of doubt one suddenly feels about someone they otherwise know well. To have that perception of a person's behavior takes time.

If anyone should know whether Simmons saw the masseuse, it's the masseuse. Simmons is the kind of person one doesn't likely forget seeing, if it's a matter of recalling an important question. But since that information isn't available, and the problem ended up becoming moot when Simmons tested negative for COVID-19, the story of doubt never needed to surface. It's only coming out now because of the way Simmons has navigated his wish to play elsewhere, icing out some teammates who have said they tried to contact or meet with him during this process.

Among all the criticisms Simmons has faced since the end of last season, none should sting as much as the one in this report, and none would portend worse for an amicable on-court relationship with those teammates who reportedly felt this doubt in July.

The NBA season hasn't even begun, but it figures to be a potentially grueling one for the Sixers and for Simmons. Unless winning can cover up the creeping stink and all parties involved are able to get what they want with a minimum of strife, the idea that Simmons and the Sixers can coexist in the meantime rests on their ability to communicate their way through these issues, building just enough trust not to make it a much uglier media spectacle than it's starting to become.

Now that we're here, the symbolic beginning of a season is the best opportunity for Simmons to create a new slate — maybe focus on playing good basketball for the sake of the sport. It may be one of his and the team's last opportunities to prevent a full-blown meltdown that will look unfortunate for everyone involved.