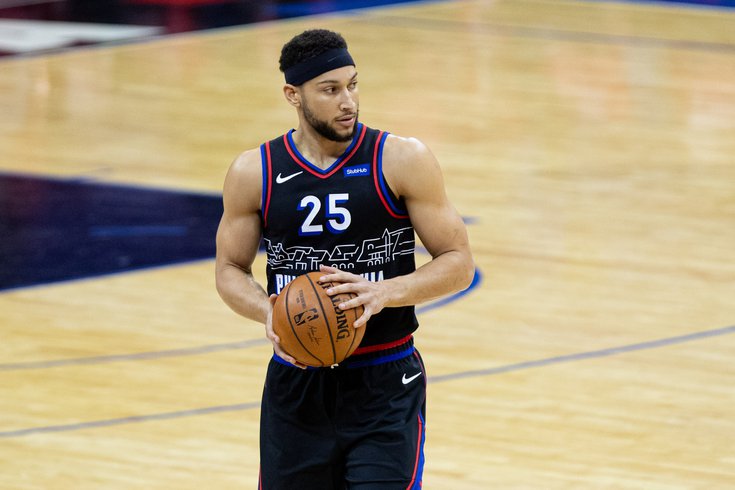 Which version of Ben Simmons are the Sixers going to get? That's been the big question in Philadelphia this week following Simmons' return to the city, though it doesn't seem to be weighing heavily on the Sixers' minds right now, at least as it pertains to their ability to potentially trade him down the road.

Publicly, the Sixers are saying all the right things about Simmons being back. Each player asked about him has asserted they're better with him available, and some have noted they don't need to see anything extra or new out of Simmons, just for him to be the player he has always been.

"We just want everybody to come here, show up and do their part, do their jobs," Danny Green said at practice on Wednesday. "I'm not asking him to do anything different than he normally does, just show up to work and do what you normally do. Because [when he does] what he normally does, we're very effective, we're very good at it, we're [the] No. 1 team in the East."

Showing up and doing what he normally does is nevertheless a point of some contention.

While waiting for Simmons to clear protocols and rejoin the team in earnest, the Sixers have only been able to put him through individual workouts and conduct meetings away from the larger group. And the early returns have not been especially encouraging — one source described Simmons as "going through the motions," though it was noted that things have improved each day over the few days he has been here.

Given the circumstances and the client history of Rich Paul (whose disgruntled players have ranged from Eric Bledsoe to Anthony Davis), this has come as no surprise to the organization. But if the trend continues and Simmons' dissatisfaction takes center stage on the floor in a Sixers uniform, there will be debate about how it impacts the team and whether it puts pressure on them to get a deal done sooner rather than later.

Simmons' familiarity as a player has been infuriating to many in the local market, though it has allowed the Sixers to present a pretty clear-cut case to rival organizations — you know exactly what you're getting if you trade for this guy. Simmons is a floor-raising, All-Defense caliber player with the obvious playoff-centric warts, and he'll bring motivation if he moves on to a situation more to his current liking. A team acquiring him doesn't have much mystery to sort through, and short-term pouting in Philly is unlikely to carry over wherever he might go next.

Present-day, there's still plenty of interest in Simmons around the league, from teams like the Pacers and Timberwolves who have been inquiring about him for most of the offseason. Recent reports have turned up names like Malcolm Brogdon and Caris LeVert, for example, but sources say the names floated in those talks came primarily from Indiana's end, with the Sixers never expressing much interest in a Pacers deal or even registering serious talks.

That underscores Philly's driving belief here. Trading Simmons for good players, even multiple good players, is not something they view as a path to either improving their current title odds or swinging a bigger deal down the line. They are after difference-making players, not more solid role players to add to what they feel is a reasonably deep (and young) group. And that's an approach that is likely going to require some patience, either for Simmons to come around and buy-in once more or for the caliber of player they want to become available elsewhere.

Critically, the Sixers believe they have the buy-in of Joel Embiid to carry out this strategy. In spite of the distance between the two over the summer and the shade cast in both directions through public interviews and leaked reports, Embiid ultimately just wants to win, and has expressed a desire to get Simmons in the fold and working toward contending. If Simmons proves stubborn or uninterested in doing so, the team believes Embiid is onboard with not settling for a trade just to be done with the problem altogether. To win a title, Embiid is aware they need star-level talent, whether that means winning Simmons back over or waiting for a star to get antsy in another market. People around the organization have noted changes in him as a leader and voice in the locker room, with Embiid ready and willing to work with whatever (and whoever) they have if a quick resolution doesn't happen.

The unspoken but understood name in a lot of these discussions is Portland's Damian Lillard, but the Sixers are heading into the season confident that things can and will go wrong for a lot of currently optimistic teams. As was reported throughout the offseason, most of the offers coming in have been far below Philly's big sticker price. The Sixers think time will be kind to them on that front, boosted by the fact that Simmons can't threaten to simply walk in free agency for quite a while, unlike most players in this position. As the honeymoon period comes to an end, they're confident more opportunities will come their way.

For now, every Simmons-related outcome is on the table. The Sixers would obviously prefer if they get a motivated Simmons who can help them win games in the short-to-medium term, or even to change his mind and use the resources at their disposal to get him to the next level as a player. But they're realistic about that possibility and feel comfortable about their ability to handle the situation should they not get the best version of him, or even if Simmons doesn't play at all.

All of this is to say that Simmons is "doubtful" for Friday's preseason finale on the road in Detroit, and that's a word that will apply to this situation in a number of ways in the days and weeks to come. The Sixers seem to feel they have the winning hand here regardless of what they can get from their disgruntled star. Time will tell if that faith is well-placed.