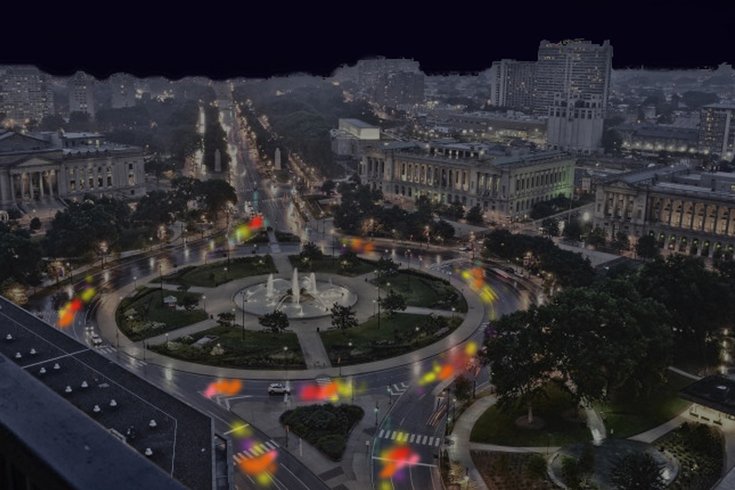 This digital sketch shows a rendering of Cai Guo-Qiang's 'Fireflies,' which will light up the Benjamin Franklin Parkway in fall 2017.

Currently littered with clunky construction for the upcoming NFL draft, the Benjamin Franklin Parkway will get a more aesthetically pleasing look come fall.

For the Parkway's 100th birthday, the thoroughfare will be lit up by “Fireflies,” a work commissioned by the Association for Public Art and created by Chinese artist Cai Guo-Qiang.

It sounds otherworldly, interactive and spectacular, at least according to aPA's description:

Fireflies will consist of twenty-seven luminous, kinetic sculptures inhabiting the form of free pedicabs that will traverse the Benjamin Franklin Parkway in fall 2017. Participants will experience the Parkway from a new perspective by riding inside the sculptures as passengers. The interactive public artwork will connect the Parkway institutions from City Hall to the Philadelphia Museum of Art.

“Fireflies" will open up on Sept. 14 during an opening ceremony that will include a light and movement performance, according to The New York Times. The work will remain through Oct. 8.

Cai's work, which includes the opening and closing ceremonies of the 2008 Summer Olympics in Beijing, often includes "fireworks and gunpowder," the Times notes.

The Times has more on the opening performance to kick off the Parkway's 100th birthday celebration:

During the opening performance, the roughly 900 Chinese-inspired lanterns will create aerial drawings in the night sky. On subsequent evenings, the lights will be more improvisational as the pedicabs are open for public use along the parkway, which has the Philadelphia Museum of Art and Robert Indiana’s “LOVE” sculpture as its bookends and is lined with flags from around the world.

Sounds a bit more pleasing to look at than that ugly-ass stage, right?