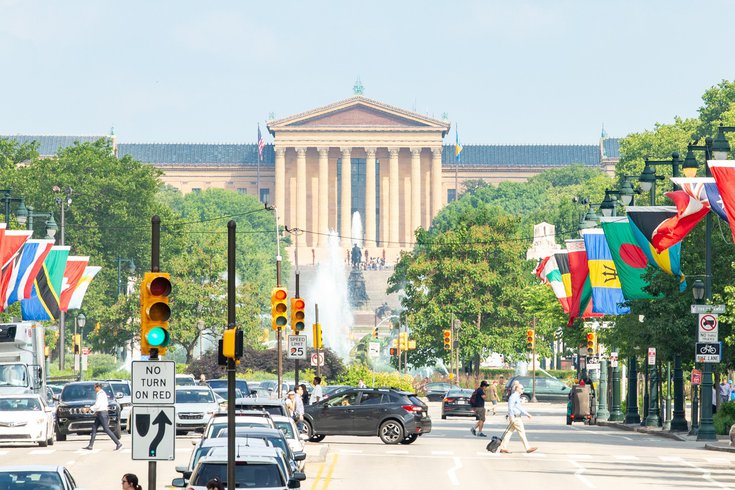 Engagement and design work for the proposed Benjamin Franklin Parkway reimagination project is expected to begin later this year once a design team is tapped this fall.

The Benjamin Franklin Parkway reimagination project continues to move forward with three finalists vying for the right to oversee the redesign of the popular thoroughfare.

But before a design team is officially selected, city officials are asking for the public's input on the three proposals that Philadelphia Parks & Recreation and the Office of Transportation, Infrastructure and Sustainability are currently reviewing.

Philly residents are invited to view the proposed design concepts and ideas online on the project's website. A survey will become available in the coming days, where the public will be able to share feedback on the three different approaches.

All input will then be shared with each design to inform its work. City officials are expected to select the winning design team for the Parkway project this fall, with engagement and design work likely beginning later this year.

“Reimagining what is possible for the parks, streets and walkways along the Benjamin Franklin Parkway is a once-in-a-century opportunity for the City,” Philadelphia Parks & Recreation Commissioner Kathryn Ott Lovell said. “Bold ideas and the best thinking from around the world will be key to developing a plan for the Parkway with the power to transform our magnificent mile into a more vibrant, more welcoming and more people-centric public space.”

The three finalists — MVRDV, The Design Workshop and a joint proposal from DLANDstudio and DIGSAU — recently participated in a five-week-long public input process called "Parkway Ideas Workshop." The process began last month outside the Philadelphia Museum of Art and culminated with a final public presentation at the Barnes Foundation this past Wednesday.

During the five-week public engagement workshop, the three design teams explored the Parkway, its history and its current uses, city officials said. The three finalists then presented their conceptual ideas for turning the boulevard into a more vibrant and pedestrian-friendly public space.

“The concepts presented by these three world class design teams represent some of the most innovative approaches to climate-resilient, multi-modal urban transportation planning,” Deputy Managing Director for Transportation Mike Carroll said. “Philadelphia has this incredible opportunity to reimagine pedestrian connections throughout the Parkway. Thanks to the Ideas Workshop, we have the benefit of globally recognized leaders in transportation engineering and urban planning poised to share their best ideas for creating a livable, walkable Parkway for all.”

The city selected the three finalists for the redesign project out of a dozen architecture firms in June. The three design teams were selected based on their experience and diversity, as well as the equity of their proposals.

City officials and a group of community partners put out a request for proposals in March to overhaul the Ben Franklin Parkway and make it more functional, appealing, accessible and safe.