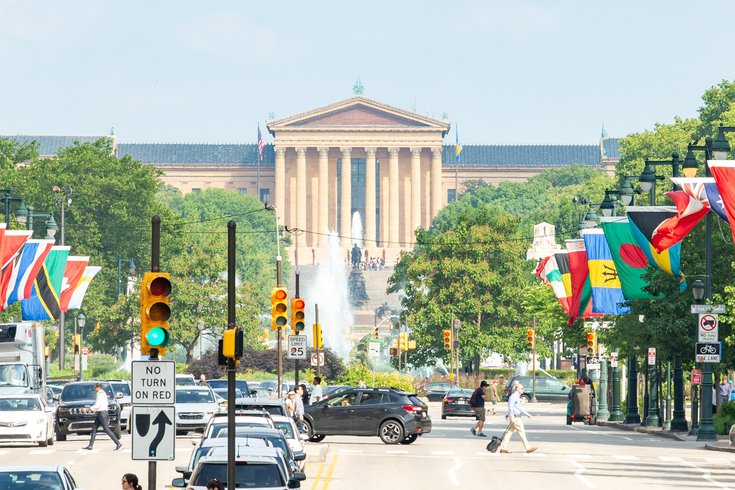 A five-week-long public input process on the proposed redesign plans for the Benjamin Franklin Parkway will officially begin next Wednesday.

A plan to reimagine the design and function of the Benjamin Franklin Parkway has taken another step forward, as city officials have narrowed down the list of candidates who could be tasked to oversee the project.

The Philadelphia Department of Parks & Recreation and the Office of Transportation, Infrastructure and Sustainability have selected three finalists out of a dozen architecture firms who responded to the city's request for proposals that was issued in March to make the popular thoroughfare more pedestrian-friendly, according to WHYY.

The three finalists — MVRDV, The Design Workshop and a joint proposal from DLANDstudio and DIGSAU — were selected based upon their experience and diversity, as well as the equity of their proposals, city officials said.

"These three world-class design teams represent some of the most innovative contemporary approaches to climate-resilient, multi-modal urban transportation planning," Deputy Managing Director for Transportation Mike Carroll told WHYY. "We have the benefit of globally recognized leaders in transportation engineering and urban planning poised to share their best ideas for creating a livable, walkable Parkway for all."

The three finalists will participate in a five-week-long public input process called "Parkway Ideas Workshop" that will officially begin next Wednesday outside the Philadelphia Art Museum. The three teams will then hold a final public presentation at the Barnes Foundation on July 14 before the city selects a redesign plan.

MVRDV is a Netherlands-based urban design firm that describes its work as "innovative, social, green, realistic and remarkable architecture for a changing world." The company has worked on projects in 47 countries, including the United Kingdom, Australia and China.

Started in North Carolina, The Design Workshop describes itself as "dedicated to creating quality landscapes that meet today’s needs and endure for future generations." The nonprofit has helped design projects in over 30 countries, including the United States, Canada and Panama.

DLANDstudio is a Brooklyn-based design firm that focuses on developing "beautifully designed, ecologically intelligent landscapes that draw from a strong conceptual basis and are executed in rigorous detail." The firm has worked on a number of projects in Brooklyn and Queens, as well as in Arkansas and Milan, Italy.

DIGSAU is the only firm remaining that is based in Philadelphia. The company describes itself as "practicing contemporary architecture, urbanism and environmental design."

The firm has worked on a number of projects across the city, including the Pavilion & Children's Discovery Garden at Sister Cities Park, the Yards Brewery location along Spring Garden Street and a conversion of the former Strawberry Mansion reservoir into an urban bird sanctuary and educational facility called the Discovery Center.

The city and a group of community partners put out its request for proposals earlier this year to seek input on an overhaul of the boulevard in order to make it more appealing, functional, accessible and safer.

The boundaries of the public realm design project are 20th Street at the southeast end to the steps of the Art Museum at the northwest end and between Winter Street and Pennsylvania Avenue.

Construction of the Benjamin Franklin Parkway began in 1917 after more than a decade of planning spearheaded by retail pioneer John Wanamaker. The boulevard, originally named the Fairmount Parkway, is considered among the first examples of urban renewal in the United States.

The thoroughfare was designed by French landscape architect Jacques Gréber to emulate the Champs-Élysées in Paris, running from City Hall and around Logan Circle until reaching the Art Museum.

In 2013, Philadelphia launched its "More Park, Less Way" action plan to undertake improvements to pedestrian safety and traffic flow, as well as make public spaces more accessible. Projects in recent years have included the creation of the Winter Street Greenway, the construction of Maja Park, upgrades to Von Colln Park and a series of summer pop-up activities at Eakins Oval.