Located at 501 Spring Garden St., the project would consist of 382 residential units and over 60,000 square feet of retail space 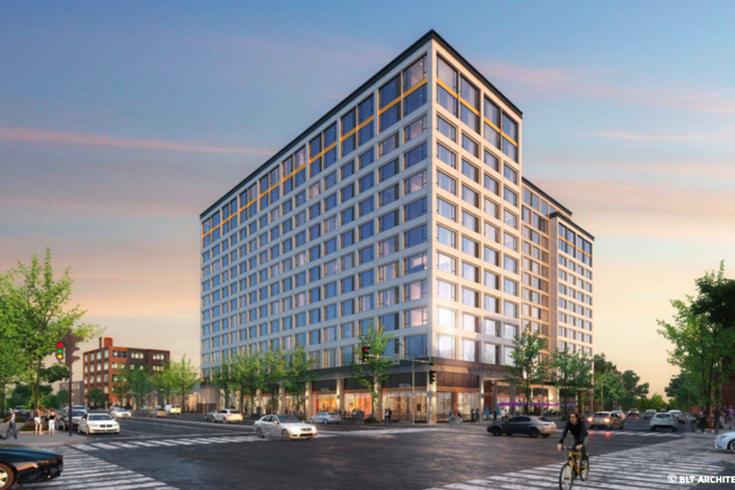 Designed by BLT Architects, the proposed retail and residential building will be situated in the southwest corner of Northern Liberties.

A proposed 13-story, mixed-use building in Northern Liberties has taken another step forward to becoming a reality after a developer purchased the project's planned site at 501 Spring Garden St.

RREI LLC has acquired the 105,000-square-foot property for $16 million, according to Philadelphia Yimby, an acquisition that took almost five years to complete due to the site's ownership being split between 11 different entities.

Designed by BLT Architects, the project was introduced to Philadelphia's Civic Design Review board in February 2020. Located in the southwest corner of Northern Liberties, the proposed building would consist of 382 residential units, over 60,000 square feet of retail space and more than 200 parking spaces.

The total residential square footage will add over 351,000 square feet to the project. The residential portion of the building will be located within a tower spanning the eastern half of the property, with an entrance at the corner of North 5th and Green streets.

The majority of the retail space will be situated on the ground floor and is expected to be primarily occupied by an Amazon grocery store. The retail portion will face North 6th Street and Spring Garden Street.

There also will be a public plaza at North 5th Street and two shared roof decks at the building's top level, with an enclosed amenity space in between. The roof decks will feature views across the city, as well as the Delaware River and New Jersey to the east.

The project has already secured permits from the city, meaning that demolition of the strip mall could begin soon. The development could be completed by late 2022 or 2023.

This is just one of several projects that have been planned and developed across Northern Liberties in recent years.

Developers are planning two residential towers on Spring Garden Street, which would add more than 750 apartment units along the neighborhood's southern boundary.

A 14-story building, located at 200 Spring Garden St. on the corner of North Second Street, would include 355 residential units and 105 parking spaces. It would replace the existing City Fitness location.

A 23-story building, which has been proposed at 412 North Second St. on the corner of Willow Street, would consist of 397 residential units and 106 parking spaces. Both buildings have been designed by Handel Architects.

A long-delayed 14-story mixed-use tower with a ground floor auto dealership and 96 residential units is finally moving forward almost three years after it was approved.

The project, which will be situated at 626 North Delaware Ave., went through the Civic Design Review process and received approval in 2018. The development will offer parking spaces both at the ground level and above the car dealership, as well as a roof deck amenity space with indoor and outdoor common areas and views of the Delaware River.

Northern Liberties has also recently seen the addition of a Target store, the new Yards brewery and Gopuff's headquarters.