Pa. ramps up fight against spotted lanternflies as insects begin hatching across region 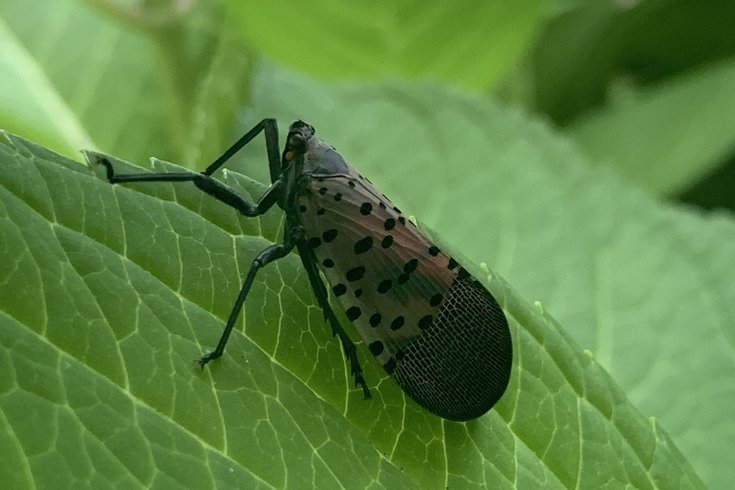 Spotted lanternflies typically hang around the region until the weather starts cooling off in the fall.

Warm weather is officially back and summertime is quickly approaching, which means that spotted lanternflies are starting to hatch and return across the Philly region.

With hatching well under way in southeastern Pennsylvania, the state Department of Agriculture is ramping up efforts to contain the spread of the invasive pests by implementing contact spraying.

Crews have begun treating transportation rights-of-way, including railways and interstates, with an insecticide spray that kills the pervasive insects on contact.

Contact spraying is ongoing in the southeastern and south-central regions of the state, where spotted lanternfly hatching has already begun and is further along than other areas. Lanternflies are about 50% hatched in the southernmost counties known to have insect populations in Pennsylvania, according to the Department of Agriculture.

The insecticide spray is most effective once 75% to 100% of the insects are hatched. Contact spraying will commence in other areas of Pennsylvania once hatching progresses.

Crews are focusing their contact spraying efforts on transportation rights-of-way due to the fact that spotted lanternflies primarily move by riding on vehicles that are traveling from infested areas.

Department of Agriculture personnel and contractors are using backpack sprayers and truck-mounted spray equipment to apply the pesticide to railways and thoroughfares across the state.

The insecticide, which contains a main ingredient of bifenthrin, has been found to be safe and was approved by the U.S. Environmental Protection Agency. However, residents who are on the state's hyper-sensitivity registry will be notified prior to spraying in their areas.

Additional factors such as weather, location and the well-being of surrounding natural ecosystems could limit how much the spray is used, the Department of Agriculture said. For example, bifenthrin is toxic to fish, so the insecticide will not be sprayed near water. It will also not be sprayed around flowering plants in order to protect pollinators.

Researchers and crews will be conducting environmental sampling throughout the process to monitor the impact of the spray on water, soil and sensitive populations to avoid any unintended consequences, the Department of Agriculture stated.

"Spotted lanternflies threaten our quality of life outdoors and destroy valuable products that feed our economy," Secretary of Agriculture Russell Redding said. "We are working diligently and strategically to control this pest in ways that are safe for the people, pollinators, plants and animals that share the environment it threatens."

The state has also recommended for residents a safe, effective circle trap that can eliminate large numbers of spotted lanternflies without harming small animals or pollinators.

More information on how to build your own low-cost circle trap with common household items can also be found on PennState Extension's website. Inexpensive traps are available for purchase at agriculture and gardening stores.

Spotted lanternflies typically hang around the region until the weather starts cooling off in the fall. Residents are strongly encouraged to trap or squish them whenever possible and check their cars before heading out to make sure none are trying to hitch a ride.

Philadelphia, Bucks, Chester, Delaware and Montgomery counties have been deemed to have widespread spotted lanternfly infestations, according to the Department of Agriculture. All five counties are among the 34 in Pennsylvania that are under a statewide quarantine to control the spread of spotted lanternflies.