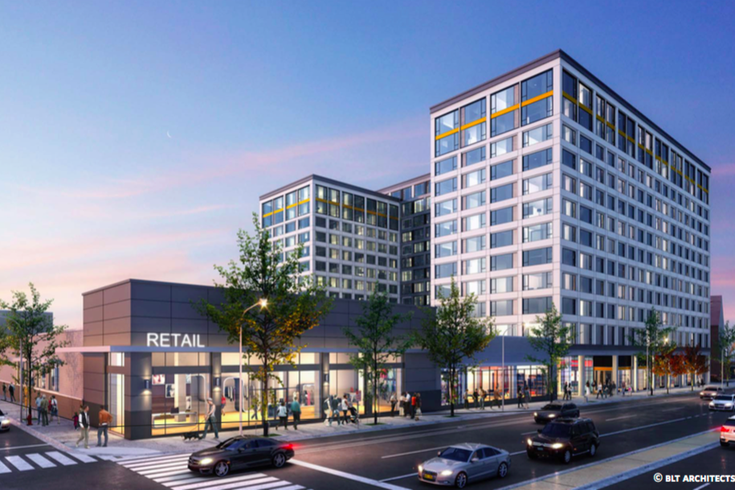 A Northern Liberties project led by Rodin Development is expected to feature an Amazon grocery store. The development, which includes 382 apartments, is slated for the corner of 5th and Spring Garden streets.

A mixed-used project proposed at the corner of 5th and Spring Garden streets in Northern Liberties reportedly will include Philadelphia's first Amazon grocery store.

The project, led by Rodin Development, was introduced to Philadelphia's Civic Design Review board back in February. It calls for a 13-story building with 382 residential units, ground floor retail and 211 parking spaces, most of them underground.

On Tuesday, the Philadelphia Business Journal reported that Amazon has signed a lease for 40,000 square feet of the 60,000 square feet on the ground floor of the development. The retail portion would face 6th Street and Spring Garden Street.

Rodin previously completed the Rodin Square development in Fairmount in 2016, bringing the Amazon-owned Whole Foods and several other retailers to a complex that includes nearly 300 rental units.

Amazon has long been at work developing plans for a grocery store concept that the tech giant aims to open at locations in Los Angeles, Chicago and Seattle. Two other Philadelphia area locations in Bensalem and Warrington have been reported as sites for additional grocery stores in the near future.

The northwest boundary of Northern Liberties has seen a wave of redevelopment in recent years, from Target and the new Yards brewery to the GoPuff headquarters currently in progress and the upcoming SoNo apartments at the former site of Destination Maternity.

It's not yet clear when the project at 5th and Spring Garden will move forward and how soon an Amazon grocery store will open in Philadelphia.