The event celebrates the voices of Black, brown and Indigenous people from around the world 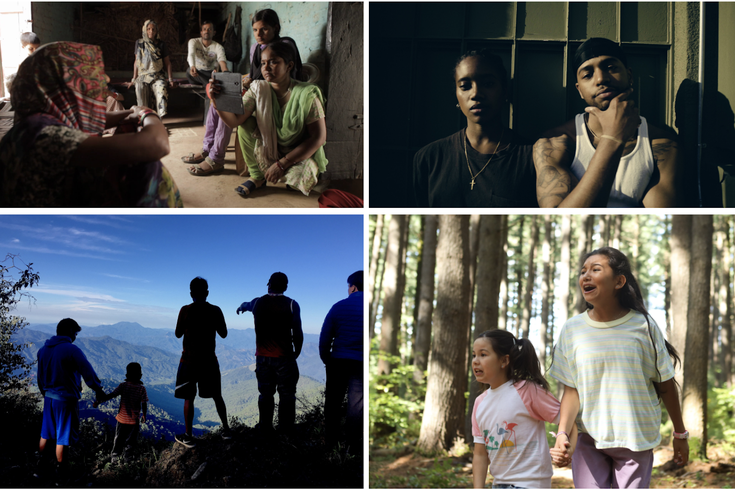 Stills from (clockwise from top left) 'Writing with Fire,' 'Friendzone L.A.,' 'Beans' and 'Strength.' The films will be screened during the 10th BlackStar Film Festival.

The festival will take place virtually Aug. 4-8, with select in-person screenings in Philadelphia. In total, it will feature 80 films.

Festival attendees also will have access to a range of programs, conversations and events, which will be presented digitally alongside the festival.

An all-access pass is $125, a virtual festival pass is $100 and an in-person screening pass is $45. They can be purchased online.

Below are some of the film selections, with descriptions provided from BlackStar.

"Friendzone L.A." – A short narrative by Angel Kristi Williams, in which two friends, one of whom is quietly in love with the other, spend a day exploring Los Angeles; world premiere

"Madame Pipi" – A short documentary by Rachelle Salnave following the lives of Haitian bathroom attendants working the nightclubs of Miami amidst the uncertainties of COVID-19 and rising costs of living; world premiere

"The Inheritance" – A feature narrative by Ephraim Asili, which weaves the history of the West Philadelphia-based MOVE Organization, the Black Arts Movement and a narrative based on the filmmaker's younger years when he was a member of a Black radical collective

"Teeth" – An experimental film by Jennifer Martin about a couple forced by U.K. immigration officials to provide increasingly performative evidence of their relationship's legitimacy, a grueling audition of acceptability that quickly escalates into surreal horror; U.S. premiere

"The Silent Protest: 1929 Jerusalem" – A short documentary by Mahasen Nasser-Eldin chronicling a 1929 protest launched by a Palestinian women's movement in Jerusalem who held a silent demonstration in protest of the British colonization; U.S. premiere

"Their Algeria" – A feature documentary by Lina Soualem about her grandparents' separation after 62 years together, their lives in Algeria and their experiences as immigrants living in a small medieval town in central France; U.S. premiere

"Eyimofe (This Is My Desire)" – A feature narrative by Arie and Chuko Esiri that follows the stories of a pair of Lagosians, Mofe, a factory technician, and Rosa, a hairdresser, on their quest for what they believe will be a better life on foreign shores; Philadelphia premiere

"Bitchin': The Sound and Fury of Rick James" – A feature documentary by Sacha Jenkins that tells the story of the legendary funkster's extraordinary and tumultuous life, times and musical legacy, in its Philadelphia premiere

"Writing with Fire" – A feature documentary by Rintu Thomas and Sushmit Ghosh profiling India's only newspaper run by Dalit women, a group of journalists who break traditions on the front lines of India's biggest issues and within the confines of their homes; Philadelphia premiere

"Beans" – A feature narrative by Tracey Deer about a 12-year-old torn between innocent childhood and delinquent adolescence; forced to grow up fast to become the tough Mohawk warrior she needs to be during the Indigenous uprising known as The Oka Crisis, which tore Quebec and Canada apart in the summer of 1990; Philadelphia premiere

"Waikiki" – A feature narrative by Christopher Kahunahana about a hula dancer's fight for survival and sanity in the shadows of Waikiki, an unflinching glimpse into paradise where there remains hope through human connection and reconnection to ʻaina (nature); Philadelphia premiere

In-person events in Philadelphia this year include opening and closing night parties, which are free and open to the public, as well as free, nightly film screenings at Eakins Oval in front of the Philadelphia Museum of Art from 8-11 p.m. on Aug. 4-7.