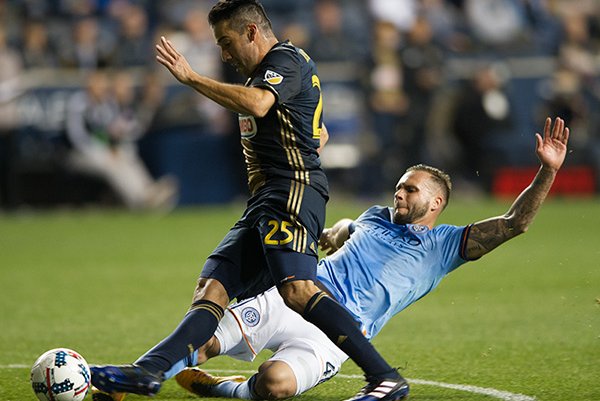 Maxime Chanot puts in a goal-saving tackle on Union midfielder Ilsinho. Philadelphia finished with zero shots on goal in the second half of Friday night's 2-0 loss.

A national television audience witnessed what we've been watching for the past five weeks, which is a last-place team struggling to score and feeling the weight of a winless slump dating back to August.

With growing fan unrest, head coach Jim Curtin did make a couple of changes to the squad, sticking with the 4-2-3-1 but handing Roland Alberg his first start of the season. Rookie Jack Elliott made his first professional start in place of Oguchi Onyewu and Adam Najem came off the bench for an MLS debut.

The pattern, however, was much of the same.

The Union played well in the opening 30 minutes, made New York City uncomfortable in their own half of the field, and carved out a few half-chances from turnovers and sloppy play. But the opening goal never came, and Curtin's team conceded early in the second half, bringing anxiety and tension to a crowd that felt nervy to begin with.

The nail in the coffin was a 90th-minute goal from New York superstar David Villa, who chipped Andre Blake from 53 yards out. Sporting Director Earnie Stewart, who had stopped to engage upset fans in the River End, turned around just in time to see the ball go over his goalkeeper's head and into the net.

Press, or be pressed

Curtin's game plan was a solid one, built to take advantage of New York's insistence on playing out of the back.

As the visitors looked to find their footing, the Union were able to get numbers forward and press the way they pressed in the beginning of 2016.

Check out the chart below: 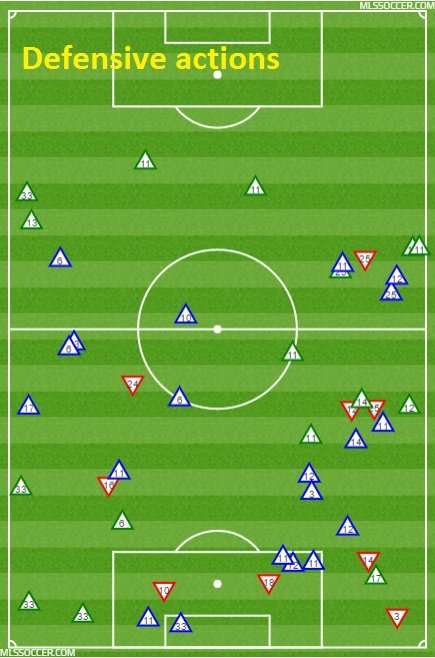 Philadelphia won seven of eight tackles (green triangle) in the attacking half of the field. They added five interceptions (blue) in New York's territory and had two more right on the inside of the 50-yard line.

Alejandro Bedoya was a key contributor in this regard but the Union didn't get enough turnover pressure from Alberg and center forward C.J. Sapong, who combined for two defensive actions in that half of the field. Alberg's interception, which is the blue #10 near midfield, was actually a defensive header as he tracked back to help out.

One of the best opportunities came early off the press, with Alberg dragging a shot wide in the 9th minute.

In the screenshot, you see how he's bracketing Andrea Pirlo, which denies time and space on the ball. Chanot, the right center back, has a switch to his left but decides to pick out Alexander Ring instead.

This is how the trap is deployed: 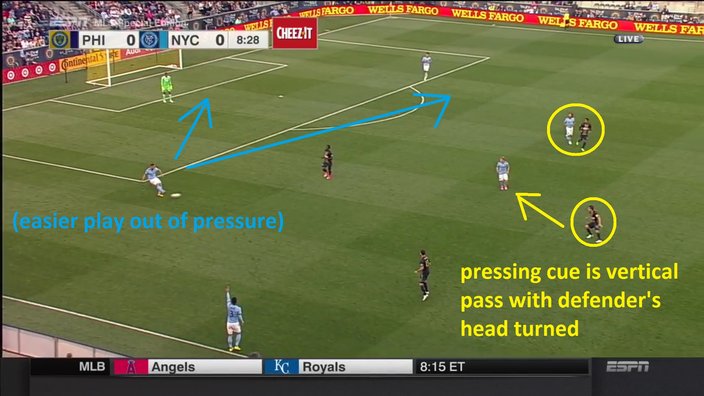 Bedoya reads this perfectly, understanding that he can close the gap on Ring, who has his back turned and is receiving a vertical pass. That makes it easy for Bedoya to get on his back, deny a turn, and jar the ball loose for Sapong. Pontius is in position to make a play on right back Ethan White but is also drifting inside for a numbers advantage around Ring and Pirlo.

When it plays out, Bedoya is moving before the pass is played, and this is the end result -

You can't press any better than that. If Alberg has an extra split second to steady that shot, maybe it's in for his first goal of the year.

On the flipside, New York scored the first goal with a somewhat similar type of play when they were able to win the ball back right on the edge of the Union box.

When you watch the replay of Jack Harrison's goal, you see that Keegan Rosenberry breaks up the initial attack, then loses the ball to Ronald Matarrita almost immediately. Richie Marquez fails to take a look over his shoulder and Fabinho can't catch the run in time, leading to the opening goal.

The kid with a great goal to start the match with help from @MatarritaRonald #NYCFC pic.twitter.com/PPkSsZrA1C

When Matarrita wins the ball, he quickly spots Harrison in the seam between left back and center back. Six Union players are positioned in the area, but each one is trying to recover after the turnover while watching the ball. Fabinho can't get "goal side" of Harrison and Marquez doesn't see the run at all. 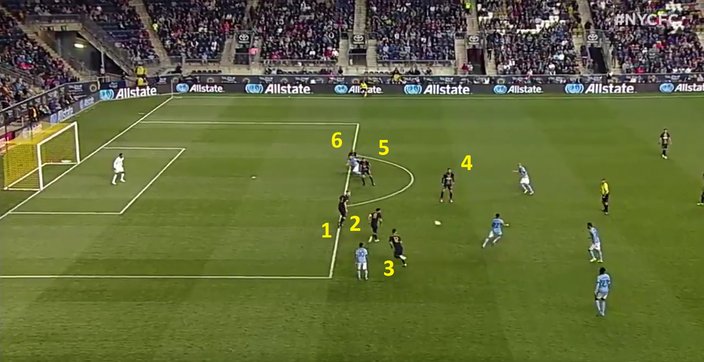 He's working hard, making center backs uncomfortable, and helping to move the team forward (three key passes in this game). What he isn't doing is getting enough looks on goal, and he finished this game with one off-target shot that wasn't really a shot at all. It was the bouncing ball that resulted in a lunge and toe-poke out of play.

His touch also let him down several times in the second half.

Another quiet game for Pontius, who ran a 60-minute shift with one slow rolling shot attempt from 30 yards out.

I'll write more on Alberg on Tuesday, but I don't think his performance was any worse than anything we've seen from Bedoya at the number ten this season.

He showed activity early, rolling that shot wide, coming back to get some touches, then winning a defensive header in transition.

He had two opportunities where balls were just a hair ahead of him, with the first one coming from Ilsinho over the top of the center backs and the second as a layoff from Sapong that was just out of reach.

Later in the game, Alberg played the best through ball I've seen from a Union attacker in quite awhile. Ilsinho was in position to get on the end of it but just didn't have the pace to do it.

A lovely ball for Alberg just missed the mark. He also had a great knockdown for Bedoya that lead to one of Philly's two shots on goal.

The problem with Ilsinho is that he doesn't seem to have any chemistry with anyone around him. When he does beat a defender, he misses the next pass or does something unnecessary, which makes moments of brilliance fall flat.

Despite having more natural attacking talent, he hasn't performed any better than Pontius this season. There's just no end product from the Brazilian.

He looked a lot better as a number eight, pressing well and doing solid defensive work.

I would like to see him on the ball a bit more, but that's going to come with time as he understands the tendencies of Haris Medunjanin and identifies spots on the field that can be exploited. Most of his work came up the right side of the field.

His short and mid-range passing game was typically sound, but he had five or six attempts with that diagonal into the channel that didn't come off.

Medunjanin finished with a blocked shot and one key pass and his set piece delivery wasn't as sharp as it was in the Portland game. There was one sequence where he inexplicably rolled a short free kick for Rosenberry instead of dumping it into the box. That didn't make any sense to me, especially since the team scored off a dead ball last week.

There was also a bad turnover in the 22nd minute that forced Andre Blake into a tough save.

A tough start to the season for Rosenberry.

Is it a sophomore slump? USMNT hangover? Higher expectations?

His passing is off to start the season and he's not getting forward at a consistent clip. You can say what you want about spacing and the need to protect Onyewu or Elliott, but he's just been "off" in most aspects of his game.

Interesting choice to start Elliott in a nationally televised game against David Villa and a team with a dynamic attack.

That said, I think he did a pretty good job. He wasn't culpable for the first goal, and there's no real blame to be handed out on the second goal.

The only real mistake I saw was the first-half yellow card tackle.

He did a bit of ball-watching on the Harrison goal, which you don't normally see from Marquez.

In the first half, he also got away with a handball on a sliding block.

I'm not putting the first goal on his shoulders because Marquez has to recognize that run.

Otherwise, Fabinho did pretty well with that matchup, since Harrison tended to do most of his work coming towards the middle of the field. His only other shot attempt came from a Union turnover that had nothing to do with Fabi.

Whatever with the Villa goal; I think Andre could have turned his hips and played it better, but the game was basically over at that point.

He had a strong sequence around the 30th minute with a reflex save and a big punch on the ensuing corner. Blake had another good stop on a Harrison curler about 10 minutes earlier and came out incredibly well to stuff Alexander Ring on a second-half through ball.

This game would have been 3-0 without Blake in net.

He committed a bad turnover at midfield that resulted in a Villa shot and resulting corner kick.

His first shot attempt came about 12 minutes later, with a slice that went wide right. He had a left-footed effort that was blocked in the 82nd minute.

He also had a poor touch on a throw-in that brought some boos from the River End.

I think he's been very good in practice, and his future is bright, but this wasn't the time or place to hand him a professional debut.

I think he had fewer than five touches in a 14-minute cameo.

He actually bailed the Union out with a no-call on a clear first-half handball.

Villa and NYCFC are incensed that this wasn't whistled for a hand ball. #PHIvNYC pic.twitter.com/UwDU2m5qMS

Stat of the game: The Union did not have a shot on goal in the second half.