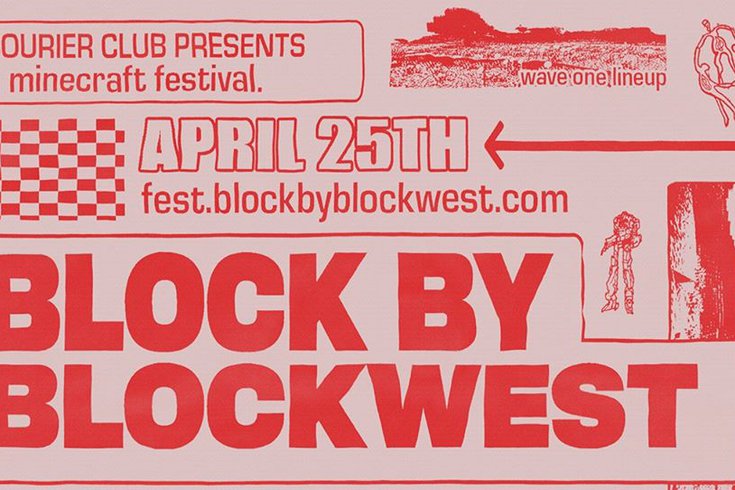 Courier Club, a Philadelphia based band, has founded a virtual music festival that concert goers will be able to attend while social distancing. Block by Blockwest streams inside of the video game Minecraft Saturday, April 25 at 3 p.m., and is free to attend for those who have the game already installed on their computers.

UPDATE: This event has been postponed to May 16th. Due to unprecedented attendance on the original day of the festival, servers were overloaded by the amount of attendees at the virtual festival.

One Philadelphia band has created a virtual festival which will take place inside of a video game.

Courier Club, a band comprised of Philly natives, created the "Block by Blockwest" music festival to stream inside of Minecraft while live concerts and festivals are banned amid the coronavirus pandemic. The event will begin steaming  May 16 in the game, and feature acts such as Pussy Riot, Cherry Glazer, Cowgirl Clue, Enjoy, and more.

The acts will perform across three virtual stages. A VIP lounge, a chat room with band members, additional games, and a merchandise tent will also be built into the larger show for concert attendees to interact with.

Minecraft is a video game designed in 2009 that can be played with only a personal computer. The game centers on using block-like shapes to build virtual buildings and even landscapes. Users also create block-headed avatars which they can use in the game to do various things, now which now includes attending Minecraft concerts.

The video game has been used for several other virtual music festivals, even prior to the coronavirus pandemic. In 2018, "Coalchella" streamed via Minecraft, and 40 artists performed. On Friday, another called "Square Garden" took place via the video game, with proceeds donated to the nonprofit Feeding America in light of the public health crisis.

For "Block by Blockwest" bands will stream pre-recorded live music that has never been heard before, and some will even operate their Minecraft avatars to perform while the music is streaming, reported WHYY.

In a video tutorial, the founding band Courier Club tells of their motivations for the festival, in bringing together music vans virtually.

"Block by Blockwest aims to forge a hub of human connectivity in this time of social distancing through online acts, competitive mini games, a vast art gallery featuring a rising fine artist, as well as a handful of other features for the festival goer to explore," said the band in the video.

Users simply need to download a copy of the Minecraft: Java Edition, which Courier Club says runs around the price of your average concert ticket to attend the festival Saturday. Additional instructions for getting to the festival are included in the video shown below.

The original event was scheduled for April 25, but was postponed to May 16 after an unprecedented turnout at the virtual festival crashed Block by Blockwest' servers. There were 30,000 attendees in at the festival before the festival began, which grew to 100,000 within the first hour of the event. In that one hour, $5,000 was raised for COVID-19 relief.