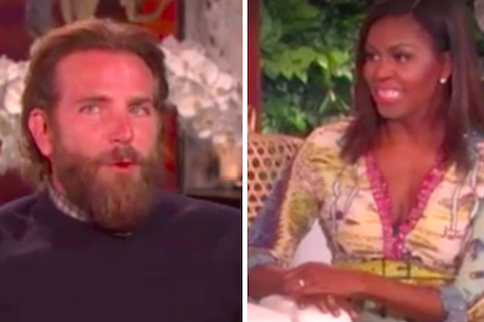 Most film critics and moviegoers enthusiastically agree that Bradley Cooper did the story of the late Chris Kyle justice in "American Sniper," delivering a performance that landed him an Oscar nomination for Best Performance by an Actor in a Leading Role.

The Jenkintown native has taken a shining to military matters in recent years, producing this year's "War Dogs." He's also signed on to direct an HBO series on the advent of Islamic State, an adaptation of Joby Warrick's Pulitzer prize-winning "Black Flags: The Rise of ISIS."

It appears, on the down low, that Cooper also has another mode of martial adornment — he's a freedom fighter, if you will.

Appearing recently with Michelle Obama on the Ellen Degeneres Show, Cooper revealed a shocker about his wardrobe during a 2014 visit to the White House. Fearing that his "crazy-town tight" tuxedo slacks would tear, Cooper decided to 86 his underwear and go commando in the presence of the Commander in Chief.

To her credit, Michelle Obama took the news well. There are worse people to hear this from than Bradley Cooper, after all.

Politics has lately been a sore spot for Cooper, who was attacked by conservatives after making an appearance at the Democratic National Convention in Philadelphia. Maybe they got their fabric in a bunch.