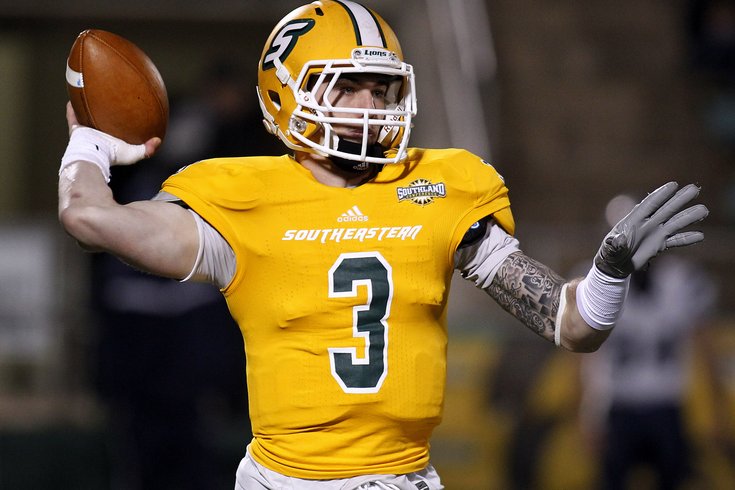 If Chip misses on Mariota, maybe he can just draft this dude instead.

MOBILE, Ala. -- Marcus Mariota isn't the only Chip Kelly protege that could be selected in the 2015 draft. SE Louisiana's Bryan Bennett, who was added to the Senior Bowl roster today, lost a quarterback competition to Mariota and served as his backup under Chip Kelly at Oregon in 2012, before transferring.

"[Transferring] was something that I had to do for myself," said Bennett. "I had a lot of friends and high school teammates I was playing with at Oregon. It was a great program. They were doing great things, so there were ups and downs. But really it just came down to what I needed to do to give myself the opportunity to continue to play quarterback."

Mariota of course went on to win the Heisman Trophy, while Bennett played in relative obscurity. Still, Bennett just seems happy to have been able to run an offense.

"It was great to be able to compete with him, and to see him do well has been awesome," said Bennett. "He’s a good kid and he definitely worked for it. Just to be able to get to compete there, and to be able to see us both continue to get an opportunity to play football is great."

When asked if Bennett had a chance to speak with Kelly, he noted that they said a quick hello.

"Being at Oregon, that whole experience, was awesome," said Bennett. "Coach Kelly did a great job with us. I learned a lot from him, and I got a really good opportunity to play under a coach like him."

Bennett also explained that it was Kelly's quick strike offense that drew him to Oregon from high school.

"I loved how they did the fast tempo. It was similar to what I had gotten into my senior year of high school, obviously a little more advanced at the college level. Just everything about it coming out of high school was awesome – the facilities, being around the coaches, and seeing them score fast and often was something I wanted to be a part of."

At SE Louisiana, Bennett ran many of the same spread and no-huddle concepts that he ran at Oregon, although he conceded that they didn't quite go as fast as the Ducks. Here are highlights of Bennett at SE Louisiana:

And here he is throwing a TD pass to Mariota on a weird play at Oregon:

Would he like to play for Kelly in the pros? "Absolutely," said Bennett. "I already have familiarity with Coach Kelly, so that would be cool."