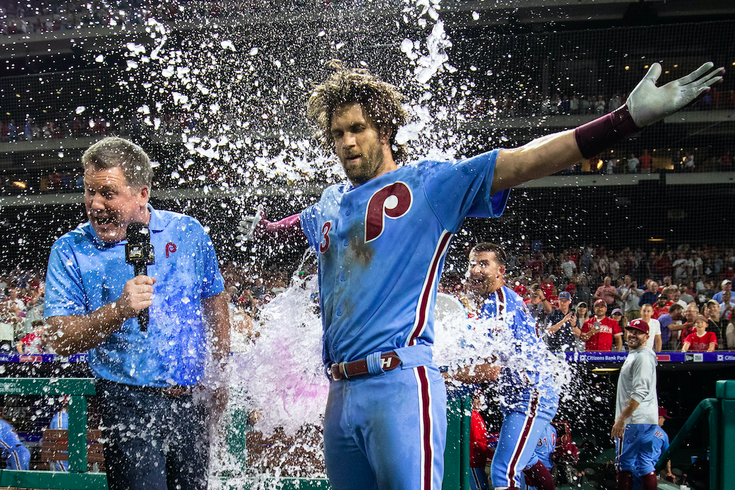 The Philadelphia Phillies beat the Chicago Cubs in dramatic fashion on Thursday night, sealing a 7-5 victory with a walk-off grand slam from none other than Bryce Harper.

The expectations of a player with a 13-year, $330 million contract are almost too massive to ever satisfy, especially on a game-to-game basis.

Harper was 0-3 heading into his final at bat, and after his third plate appearance, he got some lip from someone in the stands above the dugout.

Should Harper be responding to fans that way? Maybe not, but if it motivates him to hit a game-winning grand slam, all of Philadelphia would most likely say yes, he should.

RELATED: Another Phillies fan claims he was ejected by Gabe Kapler, but the team says it may have been a player

Harper sprinted around the diamond in 15.4 seconds on Thursday night. That's more than twice as fast as teammate Rhys Hoskins' trip around the bases after a homer earlier this year against the Mets, though Hoskins' motivation was different. He was basking in the glory of revenge with his slow trot, having hit a home run off of Jacob Rhame, who he believed had intentionally fired two fastballs near his head a game earlier.

The Phillies are still hanging onto hope of a National League wild card berth and remain firmly in the race if they can string together some wins. Moments like last night, with all the pressure and bright lights on Harper, are why the Phillies were willing to spend big to bring him here.