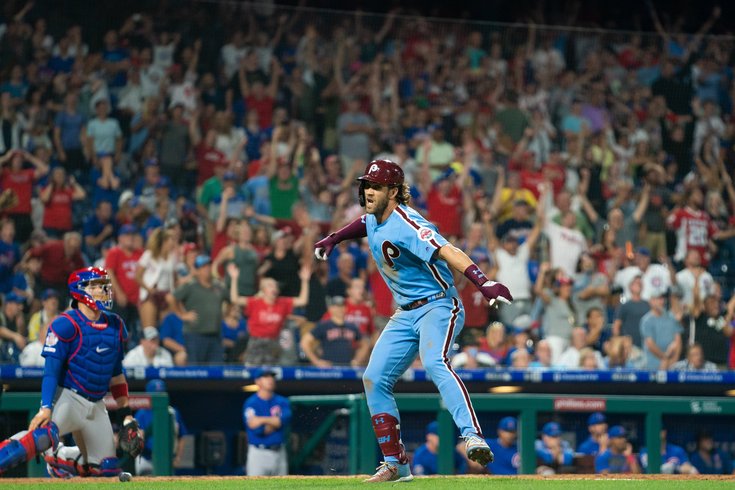 Did you shut off the Phillies game with them trailing 5-1 heading into the ninth inning, ready to chalk last night's 11-1 win over the Cubs to a fluke?

Or were you lucky enough to flip the game on just as the Eagles preseason game was ending, in time to see this?

BRYCE HARPER, YOU ARE THE MAN!

Harper absolutely crushed a walk off grand slam to clinch a ridiculous 7-5 comeback win and cap off a series sweep of the Cubs.

The Phillies have now scored 18 runs since Charlie Manuel was hired as the team's new hitting coach. It's hard to deny that his return to the team has played some kind of role in the offense's revitalization — albeit a very short-lived one over two games.

The win put the Phils, now 63-58, exactly one game behind Chicago for the second National League wild card spot — currently tied with the Brewers. The Nationals are a game and a half ahead of them at 65-55.

Philly has now swept the three-game set and will welcome the Padres to town for the weekend with Vince Velasquez on the mound Friday night, a 7:05 p.m. start.

MORE: Another Phillies fan claims he was ejected by Gabe Kapler, but the team says it may have been a player Jake Arrieta's season is likely over | MLB Power Rankings Roundup: Where do Phillies stand?