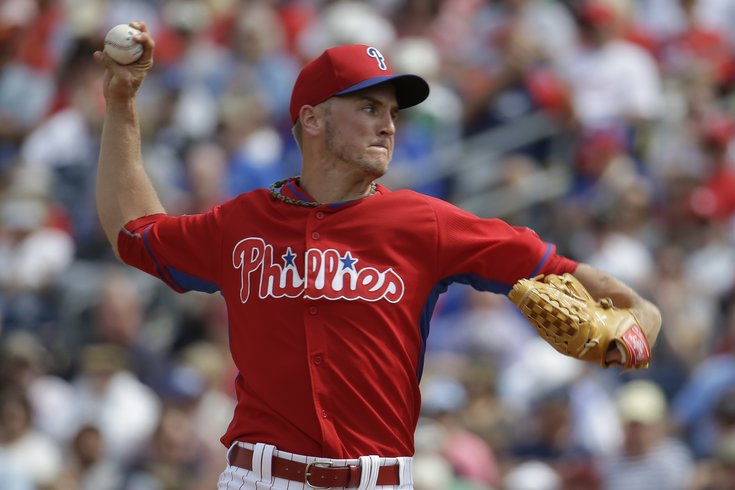 David Buchanan was a victim of the latest round of the Phillies cuts this spring.

CLEARWATER, Fla. — Phillies starter David Buchanan threw four sharp innings, allowing one run, two hits and striking out six but the bullpen let him down in a 5-3 loss to the Rays on Tuesday.

"All of my pitches were working," Buchanan said.

Buchanan came to camp competing for a spot in the rotation, but Cliff Lee's injury almost ensures he'll be one of the starting five. Buchanan was 6-8 with a 3.75 ERA in 20 starts last year.

"Nobody wants to see him go down," Buchanan said of Lee. "He's fun to watch. He's one of the best in the game. When somebody like him goes down, it's not only bad for him and the team, but it's bad for the game of baseball. That puts the burden on us to step up. Those are big shoes to fill."

Logan Forsythe hit a pair of opposite-field solo homers to left, and Mikie Mahtook hit a two-run drive for the Rays.

Forsythe connected off Phillippe Aumont on a 3-2 pitch in the fifth and drove a 1-1 pitch off Elvis Araujo out to right in the seventh.

Asdrubal Cabrera hit an RBI single off Buchanan in the fourth.

Mahtook took Hector Neris deep to left in the eighth.

"We go through pains every day," said Cobb, who is expected to be the Rays' opening day starter. "It was not excruciating pain. It was just there, a cramp."

Cobb felt tightness in the bullpen before the game, but his arm loosened up once he took the mound. He was only scheduled to pitch four innings.

"I felt it was best to shut it down after three," Cobb said. "If I was concerned about it, I wouldn't have thrown at all."

LUCK OF THE IRISH

The Phillies wore green jerseys and caps to celebrate St. Patrick's Day. The late Tug McGraw, the closer on the 1980 World Series championship team, began the tradition in the early 80s.

Rays: LF Desmond Jennings was scratched from the lineup because of flu-like symptoms.

Phillies: RHP Jerome Williams was scratched from the start because of a right hamstring injury. Williams said the injury occurred while running sprints. He hopes to pitch Sunday.

"It's a freak accident," Williams said. "I was working hard and it kind of grabbed me. So you take precautions and just treat it and be ready."

DH IN THE NL

Chase Utley still hasn't played second base, but he was Philadelphia's designated hitter for the third straight day and fourth time in five games. The six-time All-Star is recovering from an ankle injury. He's batting .417 (5 for 12).

Phillies: After a day Wednesday, RHP Aaron Harang makes his second start Thursday against the New York Yankees. Harang has missed two starts because of back spasms.