A Bucks County middle school student died over the weekend after the skateboard he was riding collided with a vehicle at the intersection of Southeastern and Turk roads in Doylestown.

According to CBS Philadelphia, the accident occurred at around 11 p.m. Saturday.

The victim, Steven Kim, was a ninth-grade student at Lenape Middle School in the Central Bucks School District. The school will hold a vigil for Kim, who was on the football team for the past three years.

Pray for Steven Kim, he was a 9th grader at my school, he recently passed away. I pray for him and his family.🙏😢🙏😢👼 pic.twitter.com/psg4yeoul3 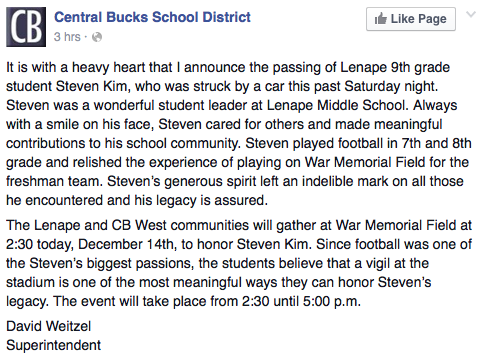