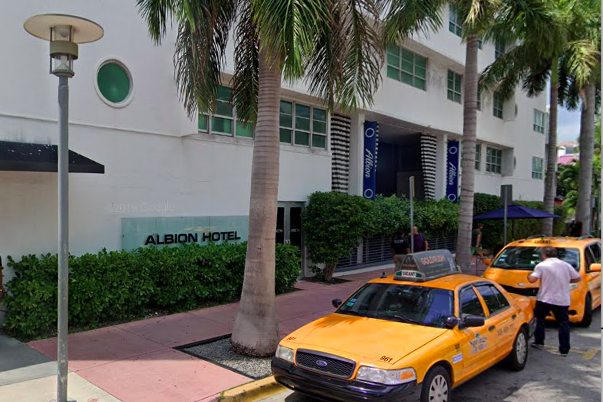 24-year-old Christine Englehardt, of Bucks County, was found dead at the Albion Hotel in Miami Beach on March 18, 2021. Two North Carolina men have been accused of drugging and raping her.

Two men have been accused of drugging and raping a 24-year-old Bucks County woman who was found dead last week in a Miami Beach hotel room, police said.

Christine Englehardt, of Richboro, had traveled alone to Florida last week for a spring vacation. Her body was found Thursday in a room at the Albion Hotel, where investigators said surveillance video showed her entering the building with the two defendants, who are both from Greensboro, North Carolina.

On Monday, authorities charged Evoire Collier, 21, and Dorian Taylor, 24, with sexual battery, burglary, credit card fraud and petty theft. They were arrested last weekend after police were able to match them to a description they had received.

Investigators said Englehardt was seen entering the hotel with collier and Taylor around 1 a.m. Thursday. During a bond hearing, a detective said Englehardt appeared to be impaired and in no condition to give consent, according to NBC 6 in South Florida.

One of the defendants could be seen keeping Englehardt on her feet as they entered the hotel, the detective added.

The Miami-Dade Medical Examiner’s Office has not yet determined the cause of Englehardt's death. Authorities are trying to determine whether she was sickened by a "green pill" one of the men allegedly gave her.

In a police report obtained by the New York Post, investigators said Collier and Taylor admitted they met Englehardt at a restaurant and went back to the hotel hoping to have sex with her. Authorities believe Collier gave Englehardt a Percocet pill.

Englehardt is a graduate of Council Rock High School North and had been working at Jules Thin Crust in Newtown, according to her Facebook profile.

The incident comes as Miami Beach police began enforcing an 8 p.m. curfew in the city's entertainment district, prompting more than 1,000 arrests in the past six weeks. Authorities said more than half of the people arrested are people who have come to the area from out of town.

The city declared a state of emergency in the days after Englehardt's body was found, citing concerns related to spring break crowds that were larger than expected.