Looks like Café Bustelo is not coming to Fishtown after all 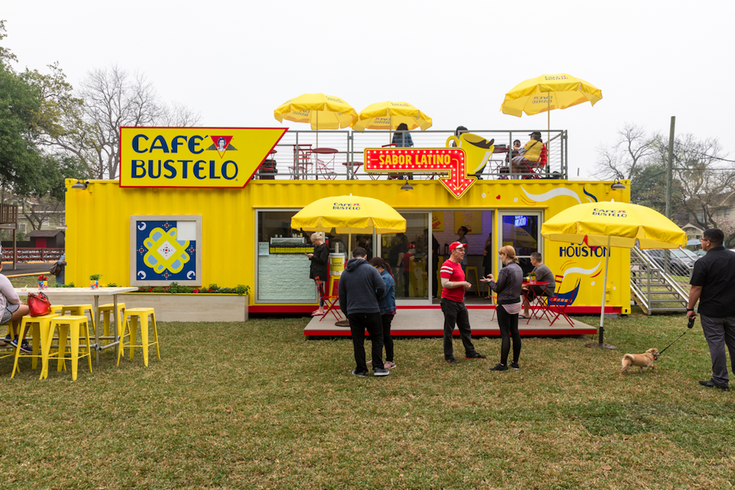 Café Bustelo was expected to open in Fishtown on July 9 but never made its debut. Instead, the company has announced it will open its shipping container coffee shop, seen here in Houston, Texas, in Northern Liberties.

Café Bustelo, the Latin coffee brand, was all set to open a three-month pop-up in Fishtown, but it looks like the shipping container coffee shop will pack its bags and move to a new location in Northern Liberties instead.

"If you pass by our Fishtown location within the next couple of days, you may notice that we're packing up and heading out … but don't worry, we're not going far," the coffee brand said in a post on their Instagram account on Saturday.

The company's official website says the pop-up is now located at Piazza Pod Park, 1075 Germantown Ave., in Northern Liberties. The company did not explain why it made the move.

Cheers, Philly! If you pass by our Fishtown location within the next couple of days, you may notice that we’re packing up and heading out .... but don’t worry, we’re not going far! And we’re so excited to finally open in Philly soon to meet you! Can anyone guess where our new Philly Café home will be? Sabor Latino! #cafebustelo #phillycoffee #instacoffee #instaphilly 📷: @moodyfoodieee

The coffee shop was originally set to open on 1221 Frankford Ave., between Frankford Ave. and Shackamaxon St., on July 9, but never did make its official debut. A day before the shop was supposed to open, the company announced it would need more time.

"We're so excited to serve you, but need some extra time to finalize details to be a part of this vibrant city," the company posted to Instagram. "We won't be opening today, but still plan to open soon and will post on our social channels once we have details."

However, the spot remained relatively unchanged since the company made the announcement.

The shipping container café was only supposed to be open for three months, and it is unclear if the delay in opening will lead to a shorter serving time in Philadelphia.

The café will serve Café Bustelo espresso-style coffee with Latin specialities like café con leche, cafecito, and cortadito. The pop-up previously made a stop in Houston, Texas from March to May.