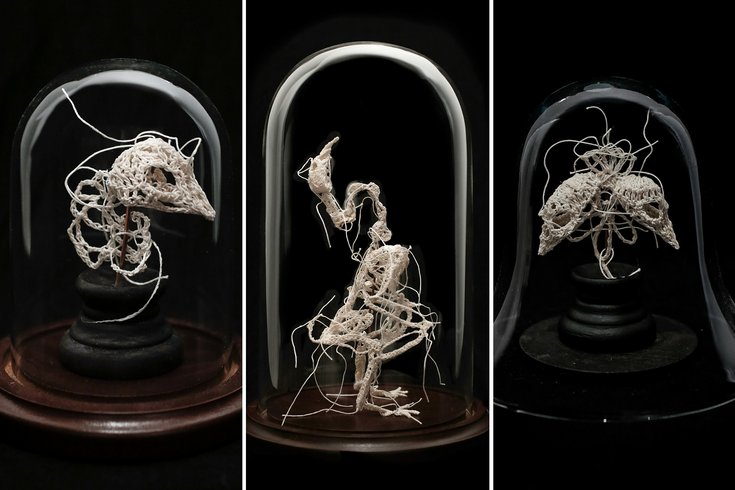 "Ghost I," "Chillblain" and "Ghost III" by Caitlin McCormack.

Forget everything your Art History 101 professor ever told you: with the visual arts, beauty is truly in the eye of the beholder. Individual people respond differently to individual works and, though some artists have carved themselves indelible niches in the public consciousness, even the works of Michelangelo or Picasso aren't for everyone. In the end, art creates a community among those who enjoy and appreciate it - or, in the case of the "Renoir Sucks at Painting" guy, totally hate it.

Thus it can be both alarming and rewarding for an artist as the community surrounding their work suddenly expands.

Philadelphia artist Caitlin McCormack is currently dealing with this quickly widening spotlight. Her delicate sculptures of animals made of crocheted cotton string and glue have gained many fans of late, appearing in BUST Magazine, The Guardian and Yahoo, among a dozen more art magazines and blogs. Her latest solo exhibit, "Mnemosyne," opened Friday at Paradigm Gallery and features 46 new pieces.

As a self-proclaimed shy and negative person, McCormack isn't sure how she feels about all the attention.

"I’m afraid of not being good enough," she told PhillyVoice ahead of the exhibit's opening reception.

"It’s awesome. I’m not complaining about having exposure because I don’t know what I could want more than that. It’s awesome, but it also arouses a sense of fear."

That's because her work is deeply personal. To an outsider, McCormack's sculptures are creepy crocheted creatures, skeletons of dead animals posed under glass like specimens to be studied. To her, each piece represents a different memory, and the overall aesthetic of her work is mined from grief. 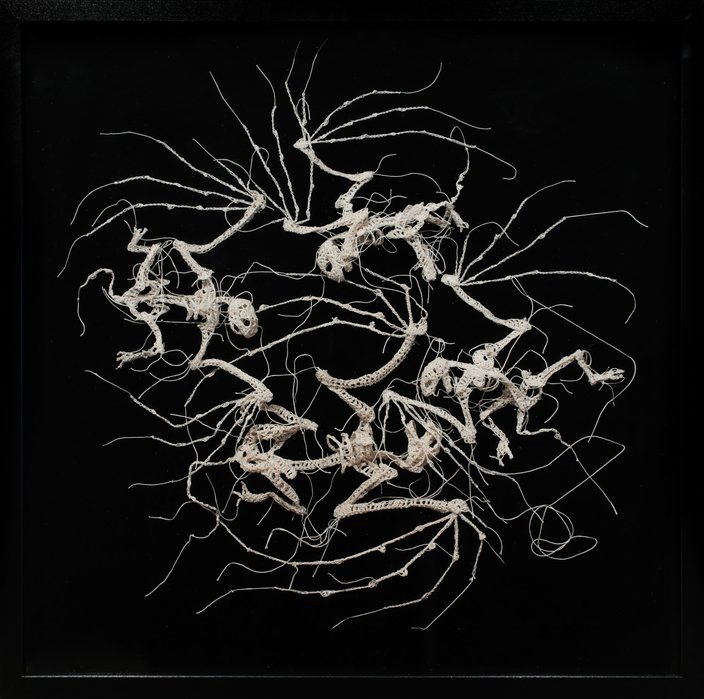 Soon after graduating from University of the Arts in 2010, McCormack's grandmother and grandfather passed away within months of each other. After such a great loss, McCormack found solace in the crafts her grandparents made: her grandmother was a master crocheter, teaching McCormack the skill as a child, and her grandfather created beautiful carved birds out of wood.

“I started to create a synthesis of their two crafts, their two art forms to deal with the grief and it turned into this obsessive coping mechanism," McCormack said.

As she created new animals, with her signature technique arising from the marriage of her grandparents' skills, she remembered their lives. The experience led her to a series of three exhibits examining her methods and purpose for creating these sculptures. The first, "Interhaven," showed at Paradigm last August and focused on how she imbued each piece with a different memory.

"I grew up in the woods and animals are extremely significant to me and my parents and my grandparents, too, and I think that had a huge impact on me. So I choose these animals to be totemic signifiers of events that transpired," McCormack said of her work. 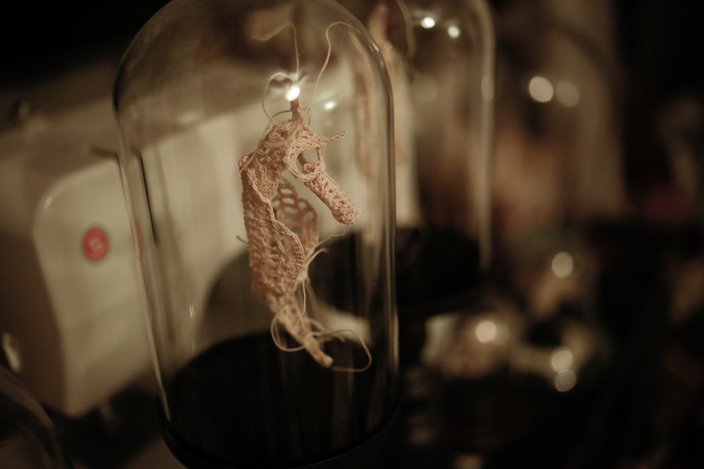 A crochet creature sits in its case in Caitlin McCormack's studio. (Paradigm Gallery)

With "Mnemosyne," she is diving further into the theme of memories, considering how they change with her work. After selecting an animal to create, McCormack views their skeletons (preferably in person, but sometimes in photos) and then she sketches it from memory, allowing her own aesthetic biases to drift in. She then turns the sketches into sculptures.

She's also begun incorporating bits of found fabric into her work, pieces of crochet and lace bought at thrift shops or garage sales with unknown histories. By combining her memories with those living within this fabric, McCormack investigates what happens to memories when they are distorted or warped with time.

Eventually, she'll show the third and final installment of this exhibit series in L.A. this June. But until then, she hopes viewers find solace in her figures, some of which take weeks to create.

"I want people to consider the ways in which their memories are universal," she said. "Maybe how everyone shares certain types of experiences and to really feel a sense of camaraderie or comfort if you’ve experienced trauma or pain. I focus a lot on trauma and I want people that have had experiences like that, or have been affected by the experiences of others, to feel comforted."

Though viewers won't necessarily know the stories behind McCormack's creations, their bleak aesthetic and otherworldly appearance make it easy to feel a connection to grief or the morose. For the artist, this is both a positive and a negative aspect of her work. 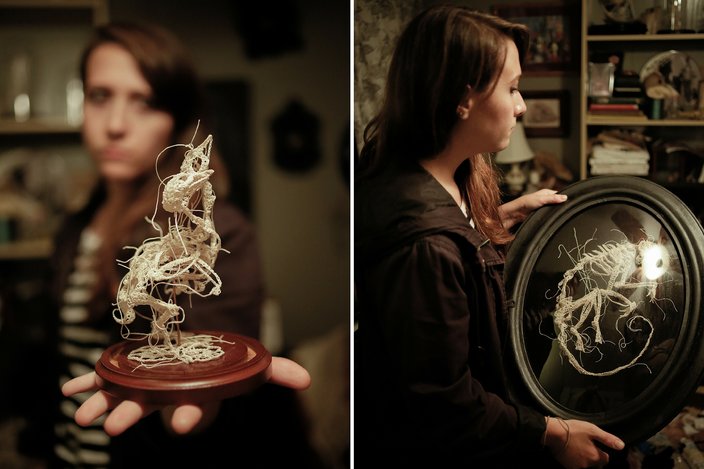 The artist Caitlin McCormack in her studio. (Paradigm Gallery)

"I’m very insecure about the fact that I’m making work that is representational. I sometimes feel like I’m doing something wrong by making something where the subject is easily identifiable," she said.

This insecurity has perhaps been exacerbated by the recent attention McCormack's work has received and is sure to receive twofold when it heads to the West Coast next year. To cope with the tension she's sought to obscure the meaning in her work a bit more, she said, allowing viewers to feel what they want.

"My work is so personal and each piece relates to a memory, so maybe my knee jerk response is to put another layer of obscurity on so that people can’t tell what it’s about. I don’t ever want to direct someone into the parameters of what a piece should be about. I want it to be up to interpretation."

Beauty, after all, is in the eye of the beholder.

"Mnemosyne" will be on display at Paradigm Gallery through Dec. 12.