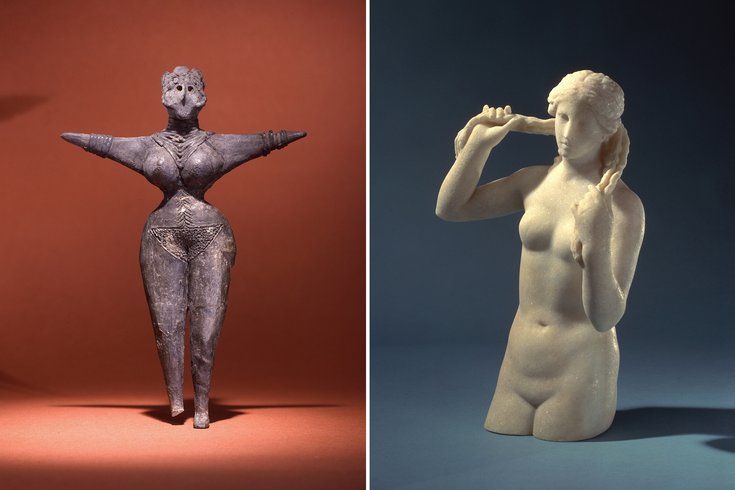 Left, a gray ceramic figurine from the 3rd millennium BCE and right, the marble Benghazi Venus from 150-100 BCE.

For the past 17 years, The Penn Humanities Forum has been the University of Pennsylvania's way of getting the academic community together to discuss the human experience. With months of programming set around one topic - like "Values of Color" and "Visual Dialogues" - the PHF pairs with many disciplines within the university for film screenings, art exhibits, musical performances and conversations.

This year's theme is "Sex," and the programming, which began last month, will touch on everything from gender fluidity to censorship. Whereas previous programs have found an older, scholarly audience, PHF Associate Director Jennifer Conway believes the "Sex" theme will draw in a brand-new, younger crowd that isn't necessarily driven by academic interest.

"The idea is just to open up the dialogue with the community," she said.

A film screening of "Appropriate Behavior" with its filmmaker Desiree Akhavan kicked off the "Sex" forum last month and Second Sunday screenings of "Gender Across Cultures" continue through March.

Today, Oct. 20, an exhibit called "Victorious Secret" opens. It recreates ancient Roman mosaics of female athletes that were once commonly mistaken as "dancing bikini girls." Artist Angela Lorenz recreated them in buttons and hairpins and will speak about her work tomorrow, Oct. 21, at Penn Library.

One of the Forum's most interesting collaborations is tucked into the third floor of Penn Museum. "Sex: A History in 30 Objects" is a mini exhibit featuring art and artifacts from all over the world and is open now through July 31. It examines how communities over time and space have long explored sexuality and gender diversity.

Dr. Lauren Ristvet, associate professor of anthropology at Penn and the exhibit's curator, sought out pieces from all over the museum collections in order to show as broad a range of ideas as possible.

"The whole idea was really denaturalizing our own ideas of sex - both kind of what we think about sex in 2015, which is obviously much broader perhaps than it was in 1950, but is still very specific to this time and place - by showing how different it is and thinking of it very broadly," she said.

Like the Penn Humanities Forum, the exhibit opens at a time when gender diversity and sexuality are hot topics, with celebrities like Laverne Cox and Caitlyn Jenner prompting discussion in news and social media.

"[Gender diversity] is something we think about much more, and have for the last three or four years," Ristvet said. "But the idea that, of course, gender is not always a binary, it’s not always just male and female, I think most people just think that it’s something that has been invented in the last five years."

"In fact, if you look through time, over space, there are many different societies that have had conceptions of three or four or five different genders." 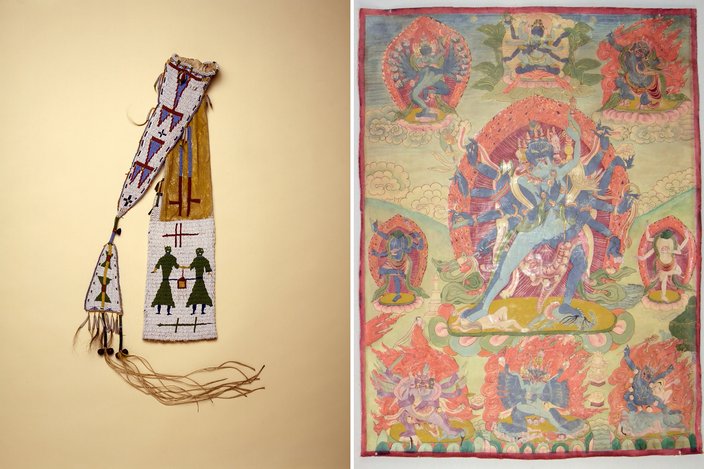 One of the exhibit's artifacts, a Oglala Lakota pipe bag from the 19th century, exemplifies this conception. The bag (above, left) was made around 1880 in the Great Plains and features the Lakota symbol of the "double woman." It was probably owned by a wintke man, Ristvet said.

"They would be people who were biologically male but would take on cultural female attributes and were not seen as being “biologically male” but were seen as this completely other gender, wintke," she said.

Another item, a 19th century mask from the Temne people of Sierra Leone, describes the gendering of children in Bondo society.

"Growing up Temne you wouldn’t be considered either male or female until puberty," Ristvet said. "They were just totally neutral and non-gendered. Then, at puberty, you go through this long initiation ceremony where ... all kinds of things happen - both girls and boys will be circumcised, they’ll be given new names, they’ll be taught how to be a woman or a man. It’s a very complex ceremony."

Though the exhibit is small, it packs a punch, hosting items from ancient Iran, Greece, Rome, New Guinea, Tibet, North America and more. Each one offers a glimpse into other cultures' views of beauty, sexuality, love and gender. Like the Penn Humanities Forum as a whole, it's sure to fascinate viewers while opening up a dialogue about sex in today's society.