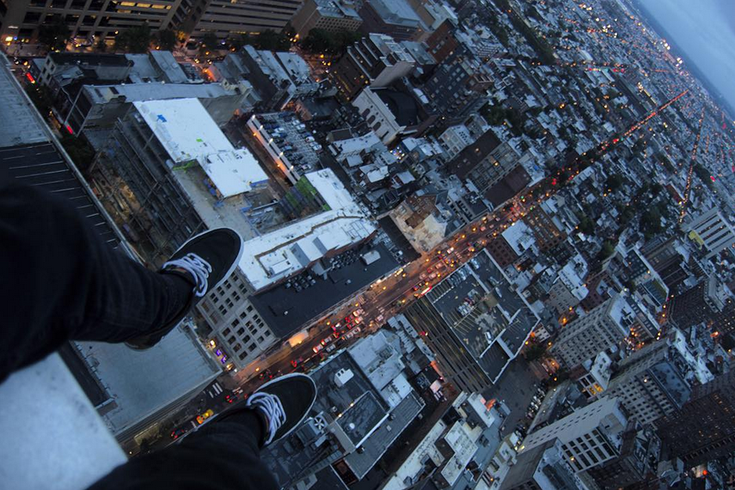 "Freedom to me, means I can express myself without judgment. That is what this page is for, to share my life, how I'm feeling, what I'm thinking. I can be who I really am, without secrets. I am grateful to have freedom, and I will never take it for granted. #savephilly @savephilly."

Some call it “rooftopping” or “sky walking.” Others refer to them as “outlaw Instagrammers.”

Over the years, photographers have used social media to shock, surprise and delight users with aerial shots of the urban world. Here in Philly, one of these shutterbugs goes by the name Diiversity. At just 17, he’s already amassed more than 3,000 followers thanks to his adventurous snaps high atop local buildings.

While Diiversity never shows his face (he’s afraid his mom would flip out if she knew the places he goes to take pics), his photos speak volumes about the timeless story of man in the city. In a recent pic, the teen can be seen hovering dangerously close to the edge of a skyscraper in a thunderstorm. In another, his feet dangle against city lights a long way down.

Being 17, Diiversity has no idea where life will take him, but his camera is at the ready in case there are great shots to get. But as he looks through his dozens of Instagram posts, even he admits he can surprise himself with how far he’s willing to go to get the picture.

Diiversity has also managed to get atop the PSFS sign above the Loews Hotel. He’s definitely not afraid to traverse narrow walkways and peer over the edge of some of Philly’s tallest buildings to get a so-called “extreme selfie.” Like a modern-day tightrope walker, he’s careful, focused and driven by a desire to get the money shot.

“I first got an interest in photography when I was 15, and I got my first camera the Christmas after my 15th birthday,” says the Montgomery County resident.

It didn’t take long before the amateur began experimenting with not only how to photograph, but also where. He was especially inspired by other daredevil photographers he found online.

“I somehow came across Humzadeas’ Instagram account,” he adds. “He shoots on rooftops and subways and pretty much anything. He made me want to start taking pictures and definitely influenced my style of photography.”

“A friend from school told me about it,” recalls Diiversity, “so me and my Dad drove down to check it out. I just got my camera as a present and didn't know how to use it. So I just shot on auto.”

His early photographs are a bit prophetic. The teenager had already demonstrated a keen eye for monuments of urban life. But little did his Dad know the experience would set off a year-long experiment in pushing the limits of both creativity and physicality, with a few bumps in the road.

Diiversity got arrested the day after his 16th birthday.

“I was arrested with three of my friends in an abandoned building and charged with criminal trespassing, criminal mischief and possession of an instrument of crime,” he notes, “which happened to be my camera which I never got back.”

The teenager admits after a run-in with police he still has a fear of getting caught; he’s currently on probation.

“But I won’t let that stop me from doing what I do,” he insists, like shooting at night, his favorite time of day. “The city lights always fascinate me and it gives me an opportunity to show people a unique perspective.”

He even has his own hashtag (#diiversityproject) that he uses and encourages others to utilize when they capture their own aerial photos. For Diiversity, being able to narrate his life on social media has been a way to overcome shyness and other challenges of being a young man coming of age in a digital world.

“I’ve always felt that people were judging me,” he admits. “But I want to be unique and that’s the meaning behind my name. I just want to show people the world from a different angle.”

He’s putting together a portfolio in hopes of maybe showing his work outside social media, where he mainly posts. He’s also set his newest sights on New York City, specifically the Williamsburg Bridge.

“The higher I go, the more fun I have,” Diiversity insists. “I can’t remember a time I was ever afraid of heights. I think it’s because there’s so much adrenaline rushing through my body that I don’t fully realize what I’m doing.”

“Sometimes I think back and say to myself, ‘What the f--- was I thinking?’”