Camden schools superintendent: Continuing the progress and looking toward the future

McCombs: The district is progressing at a thrilling rate 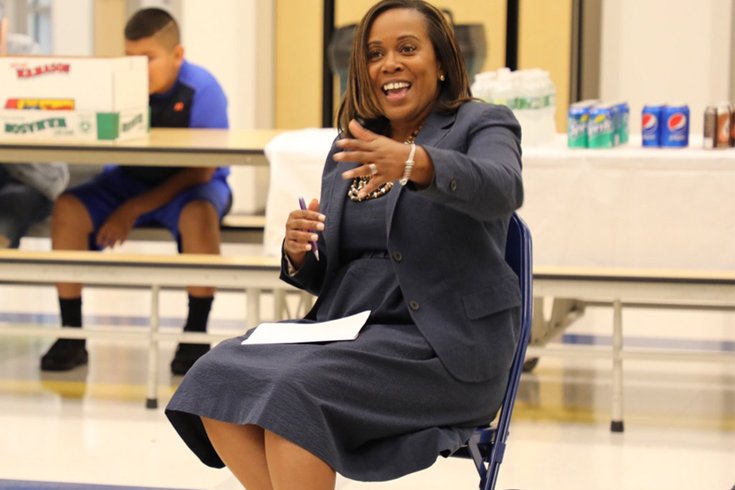 Katrina McCombs is the superintendent of Camden City School DIstrict.

At the close of the 2018-19 academic year, I want to congratulate Camden City School District’s students, educators, staff, and supporters on another successful year full of milestones and academic achievement.

The mantra around the City as of late has been “Camden Rising,” an encapsulation of both the city’s various accomplishments in public safety and public health, as well as the literal rising of towers and buildings that mark an economic renaissance. Yet, there has been no single group that has embodied the spirit behind this slogan more than our schools and students. The goals they have set and met this year and in the last five years are emblematic of the City’s resurgence, and the widespread impact it is having on our communities.

As a 26-year educator in the Camden City School District, I have seen the district change and transform in various fashions for nearly three decades. I have seen periods of struggle, and I have seen upward trends that lifted our students to new heights. I have seen students leave Camden schools and accomplish incredible feats, and I have seen others falter without recovering. With all of this in mind, I can say with certainty, that today, Camden schools are on a path to progress unlike anything I have experienced since I was a Camden student myself, growing up on Morton Street.

At the time of the state’s intervention in 2013, the Camden City School District was beleaguered with steep challenges decades in the making. From financial mismanagement to grade-fixing scandals, the District struggled to put children first, leading to poor results. One in five students dropped out before graduation and 23 of the 26 schools were in the bottom five percent of the State.

Since then, a city-wide initiative to improve Camden’s schools and the accomplishments of its students has achieved unprecedented success. To start, 11 new or significantly renovated school building projects have been launched, 10 of which are serving students this year. Additionally, $465 million has been invested in school buildings since 2009. This includes new K-8 schools in several neighborhoods, significant building renovations in six neighborhood schools, and a $136 million State investment to rebuild the Castle on the Hill into a state-of-the-art, 21st century public high school.

Roberto is a Camden High senior who has faced seemingly-insurmountable obstacles during his education. Despite being displaced, Roberto has beaten the odds on several fronts and is now graduating in the top 10 of his class.

Furthermore, in 2012, the dropout rate in Camden schools was approximately 21 percent; in 2017 that rate was halved to just 11 percent. Over the same period, Camden students achieved a 17-percentage point rise in the district’s graduation rate – increasing it from 49 percent to 66 percent.

These are not just metrics. The value of a high school diploma is infinite when compared to the alternative, and in 2019 more Camden students are earning that diploma and unlocking a better path for their future.

We are extremely proud to say that students like Jess Gonzalez-Wilson, an incredible young woman with medical troubles and a parent in prison throughout her education, and Zhane Brown, a student whose home caught fire four years ago, are graduating this year with the rest of their class. Students around the country like Zhane and Jess end their education prematurely when faced with these and similar obstacles. Their drive to succeed and eventual accomplishment is a testament to the progress being made in Camden schools.

Today, more than 300 of our high school students are earning college credits at Camden County College, and we have watched out-of-school suspensions fall by 53 percent. Meanwhile, K-8 math proficiency has nearly tripled in just three years, and reading proficiency has more than doubled.

Put another way, our students are better prepared to embark down a path that leads to employment and economic mobility than they have been in decades. This year, we have college destination tracking systems in place for the first time ever in our district, and FAFSA completion is up 77 percent.

The District is progressing at a thrilling rate, and our students are benefitting tremendously. Today’s Camden graduates are leaving our facilities prepared to take advantage of the new, skilled jobs coming to Camden City. This has been a year of incredible success, and I hope everyone will join me in congratulating the Camden students and educators who made it possible, and who will continue to push us further in the years to come.

Katrina McCombs is superintendent of the Camden City School District.