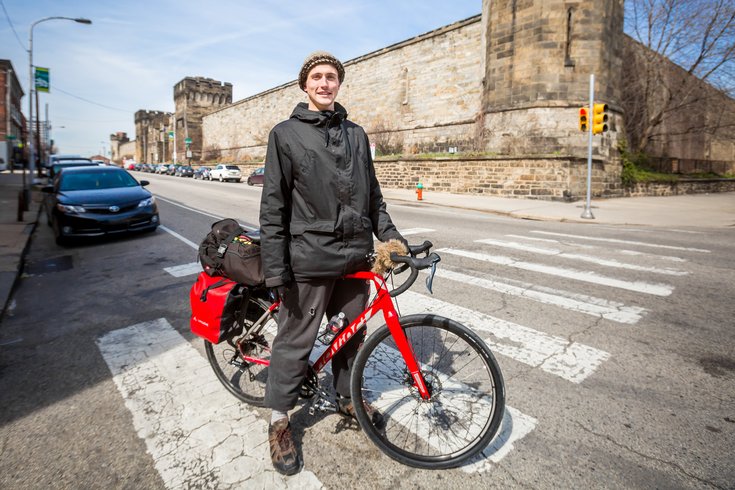 Grant Hatherley poses for a photo on Fairmount Avenue on Monday morning after returning to Philadelphia to continue his bike trip to the Mexico border. Hatherley's trip was interrupted in mid-January when his bike and most of his belongings were stolen in Port Richmond.

The last time Grant Hatherley set foot in Philadelphia, the bicycle he was supposed to ride from Canada to Mexico got stolen outside a Dunkin Donuts in Port Richmond.

He’d made the mistake of relying too much upon the kindness of a stranger to keep an eye on his ride and just about everything he had to his name.

On Sunday – a shade over 60 days later – the 20-year-old adventurer returned to the city of the unsolved crime to resume his ride on a new bicycle.

This time, he’d benefited from the kindness of strangers who heard of his plight and wanted to help get him back in the saddle.

This “Grant Hatherley vs. The World” mission came on the heels of a successful trek to ride a bicycle across Canada, a 4,000-plus-mile “journey of self-discovery” he completed in 68 days in 2015.

Speaking with PhillyVoice in the aftermath of the January theft, which sent him back to Canada to regroup, Hatherley said, "I'm not gonna give up on this. There's always a grand revenge. I've learned from this.”

He’s living up to that promise.

"I didn’t want to take my box out of the box right away (when I got to Philadelphia) because someone might steal it, you know?” – Grant Hatherley

Hatherley arrived at the Filbert Street bus depot around 10 a.m. Sunday. He brought his new bike with him on that bus, a carry-on item that cost him an extra $47.

While he didn’t pedal back up to the spot where his last bike got stolen – “I probably should have,” he lamented on Monday afternoon – he said he cruised all around town, from down by the Navy Yard to Fishtown and Fairmount, where he again stayed with a family friend.

“I didn’t go through all the rough neighborhoods again, so that’s a lot better,” he said. “The bike I have now is a lot better than the one I had before. I didn’t want to take it out of the box right away because someone might steal it, you know?” 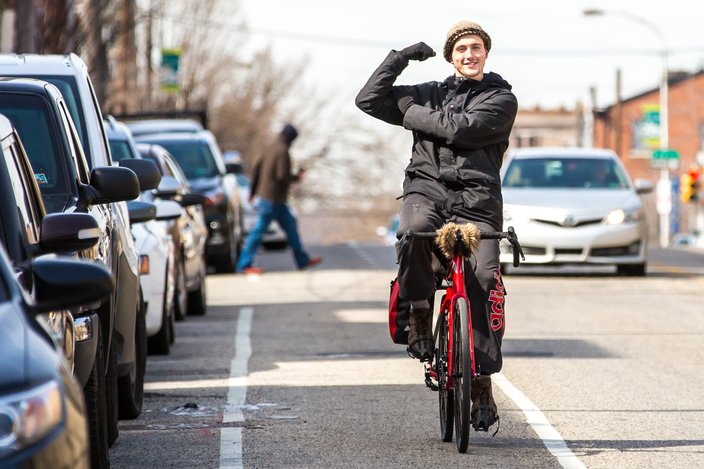 Grant Hatherley rides along Fairmount Avenue in Philadelphia, jokingly showing his bicep as he restarts his cross-country ride on Monday morning.

For that, he thanked the kindness of friends, family and strangers who contributed to his GoFundMe campaign.

That helped him not only get the bike – albeit after some delays that enabled him to travel to Spain, Portugal, Morocco and Gibraltar in the meantime – but have a little spending cash for his travels.

“I’m actually liking it here this time. I’m happy,” he said via phone call over Facebook when his phone battery sat at 12 percent. “It’s not as cold as it was before, but we are getting a snowstorm.”

That impending storm saw him hit the road toward Wilmington after snapping photos at the Philadelphia Museum of Art’s requisite Rocky Statue tourist stop. He was calling from a KFC along Route 291.

From here, he expects to arrive in the nation to the south of America within a month and a half, with a stopover in North Carolina, where he’ll visit family he hasn’t seen in a while. He spoke about not letting distractions take people away from their ultimate goals.

“Passion. This is something I love to do. If you love something so much, don’t let the small things – even if it costs a lot to overcome a big mistake – stop you,” he said. “With the help of friends, family and GoFundMe, I’ve started back up and am doing what I love. In return, I’m going to keep up to date on my progress. It should be interesting.

“I am going to finish biking to Mexico now.”

And with that, he was off the phone and pedaling away from a snowstorm that could’ve trapped him in Philly for a while.