Riley June Williams was released from Dauphin County Prison; she also now is charged with aiding and abetting theft of government property 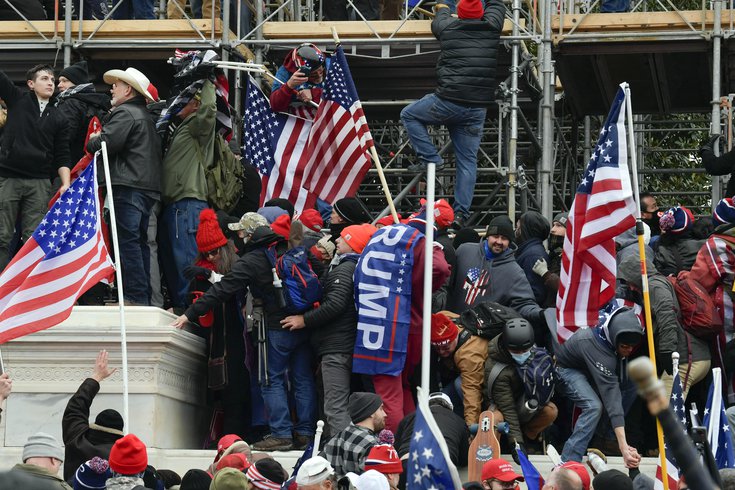 Above is a scene from the Jan. 6 riots as pro-Trump insurrectionist stormed the U.S. Capitol. Riley June Williams, the Harrisburg woman allegedly involved in the theft of a laptop from Rep. Nancy Pelosi's office during the melee was released from jail while she awaits trial in federal court.

The Harrisburg woman allegedly involved in stealing a laptop from U.S. House Speaker Nancy Pelosi's office during the U.S. Capitol insurrection was released from jail on Thursday into the custody of her mother as she awaits her next court date.

Riley June Williams, 22, had been arrested Monday and charged with violent entry to and disorderly conduct on Capitol grounds along with trespassing for her alleged participation in the pro-Trump riots.

At Tuesday's court proceedings, federal prosecutors amended the criminal complaint against Williams, and according to court documents, she now also is charged with aiding or abetting the theft of government property and obstructing, influencing or impeding an official proceeding.

Next, Williams is scheduled to appear virtually in a Virginia federal court on Monday.

A court order signed Tuesday by U.S. Magistrate Judge Martin Carlson detailed the conditions of Williams release from Dauphin County Prison: She must remain in the custody of her mother and submit to location monitoring. She also must forfeit her passport and is under home detention, meaning she cannot leave the residence for any reason other than school, work, medical appointments, religious services or trial-related travel.

"The gravity of these offenses is great," Carlson told Williams. "It cannot be overstated."

Williams reportedly could be sentenced to 20 years in prison if convicted.

A former boyfriend of Williams tipped off the FBI that she appeared in a video from the riot and planned to sell Pelosi's computer to Russian intelligence agents, which launched an FBI investigation. In the video, investigators said a woman who matches William's description is seen among the rioters inside the Capitol.

She was arrested Monday afternoon. Williams' lawyer, Lori Ulrich, told Carlson the boyfriend had been abusive to Williams and that "his accusations are overstated."

Carlson said he considered that Williams had no prior criminal record when deciding to grant Williams' release, the Washington Post reported. He cautioned her mother, Wendy Williams, that she could be charged with a crime should her daughter violate the conditions of her release and she not report it.

"Your mother is making an enormous leap of faith on your behalf, and you are the one person in this courtroom who can make sure your mother doesn't have to choose between her love for you and her duty to this court," Carlson said.

In the amended criminal complaint, an FBI agent alleged Williams was seen going into and coming out of Pelosi's office on recordings from closed-circuit cameras in the Capitol.

The agent also said a person with the username "Riley" posted on Discord, "I STOLE S*** FROM NANCY POLESI" and "I DOMT CARE I TOOK NANCY POLESIS HARD DRIVES I DONT CARE KILL ME."

Two days after the pro-Trump riot at the Capitol, Pelosi's deputy chief of staff, Drew Hammill, said that a laptop used for presentations had been taken from an office conference room. The current location of the laptop was not disclosed in court documents or discussed Thursday.