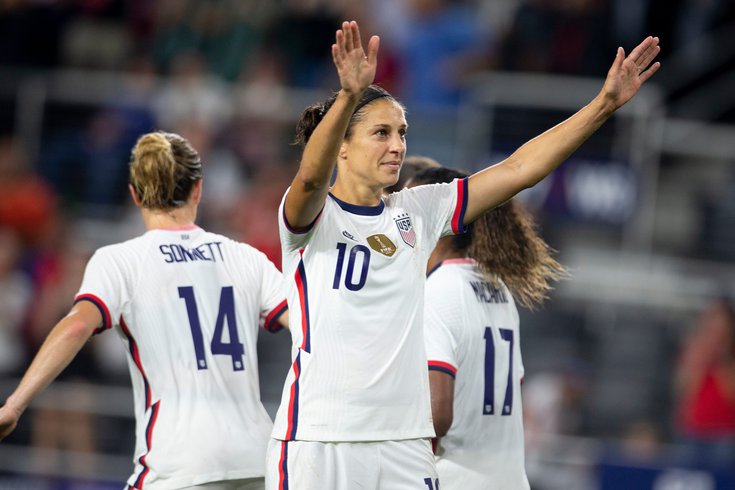 Carli Lloyd, originally from Delran, Burlington County, will retire as one of the most accomplished soccer players in U.S. women's national team history. She finishes her career with the national team and her professional club with matches between now and the end of October.

Honors of all types are being bestowed on Carli Lloyd as the U.S. women's national team great nears the conclusion of her retirement tour. Once the latest came from the Burlington County Commissioners who declared Thursday to be Carli Lloyd Day in recognition of the Delran Township native's accomplished soccer career.

Oct. 14 was selected for the honor to coincide with Lloyd's hometown throwing a retirement party for her at Delran Community Park, the county commissioners said.

"Burlington County has a lot to be proud about and close to the top of the list is being the home of Carli Lloyd, America's soccer hero and an inspiration for young girls and boys across the globe," Burlington County Commissioner Director Felicia Hopson said. "Carli isn't just a stellar athlete, she's a champion role model who epitomizes the benefits of perseverance and hard work. She's represented both our country and our county in an amazing fashion and has made us all proud to call her one of Burlington County's very own."

Lloyd, 39, said in August that she would be retiring from international and professional soccer in October after a storied career.

The soccer star began her career at Delran High School, where she played from 1997-2000. Lloyd then attended Rutgers University where she became the Scarlet Knights' all-time leading scorer and a two-time All-American.

Lloyd debuted for the U.S. women's national soccer team in 2005. The forward and midfielder is one of the program's most accomplished players and prolific goal scorers during her 16-year international career. She has scored the fourth most goals in USWNT history – 128 – and has the second-most international appearances – 312. She's also sixth all-time in assists.

Lloyd was on the roster of four FIFA Women's World Cup teams for the U.S., including the winning campaigns in 2015 and 2019. The two-time FIFA Player of the Year is the first player ever to record a hat trick in a women's World Cup final, scoring three goals against Japan in 2015. Her 10 goals in World Cup competition is third all-time in USWNT history.

In the Olympics, Lloyd helped lead the U.S. to the gold medal in 2008 and 2012, and she scored the game-winning goal in both gold medal games. The two-time U.S. Soccer Female Player of the Year made history at this summer's Tokyo Olympics when became both the oldest Olympian in USWNT history and the program's all-time leading Olympic goal scorer with 10. She capped off her Olympic career with two goals, including the game-winner, during the team's bronze medal game match against Australia.

Lloyd has played for six clubs during her 12-year professional career, including most recently for NJ/NY Gotham FC of the National Women's Soccer League.

"Whether scoring goals for Delran, Rutgers, Gotham FC or the USA, Carli has always played with grit and determination, and displayed her South Jersey credentials proudly," Burlington County Commissioner Dan O'Connell said. "Soccer fans across the globe know about Delran in Burlington County, New Jersey because of her outstanding performance and achievements. This resolution is intended to express our thanks and to help make her retirement party all the more special. I can think of few people more deserving than Carli."