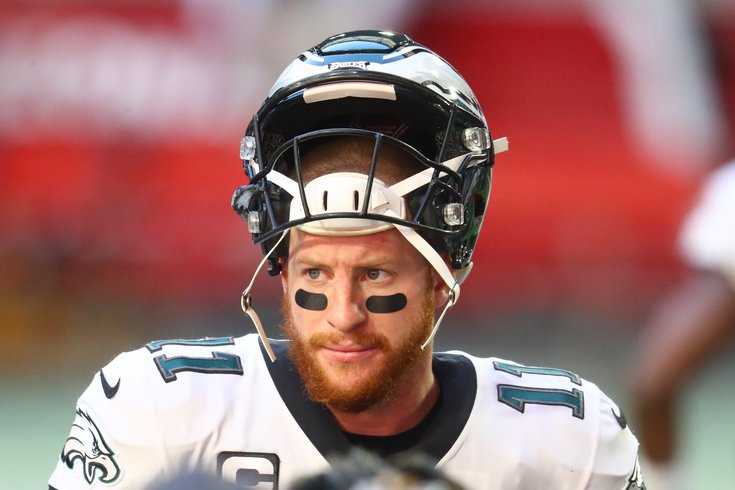 Carson Wentz's Woodstown, New Jersey home was listed on the market for $1.7 million after the former Philadelphia Eagles quarterback was traded to the Indianapolis Colts last month.

The Carson Wentz era is over in Philadelphia after the Eagles traded their former franchise quarterback to the Indianapolis Colts last month.

Wentz, 28, has now listed his Woodstown, New Jersey home for sale as he and his family start a new chapter in Indiana.

Located in Salem County, the home was built in 1995 and sits on an 11-acre lot, adjacent to a 23-acre farm that's also for sale for an additional $299,000. The listing for Wentz's home on RedFin includes 46 interior and exterior photos of the property.

The 7,408-square-foot home has five bedrooms and 4.5 bathrooms and a three-car garage. It has a custom bar, gym, and home theater that seats 10 people, as well as a detached entertainment center with an indoor endless pool, game room loft, work center and a hunting room with a walk-in safe.

Wentz purchased the home using an LLC in June 2016 for $950,000, shortly after he was selected by the Eagles with the second overall pick in the NFL Draft.

Wentz spent five seasons in Philadelphia and was a key force in the team's 2017-18 Super Bowl title run.

Now in the AFC, Wentz will look to revive his career under Colts head coach Frank Reich, who was the Eagles' offensive coordinator during Wentz's first two seasons in the league, including the team's championship season.

The real estate listing was posted after former Eagles head coach Doug Pederson put his home in Moorestown on the market for $2.7 million last month.