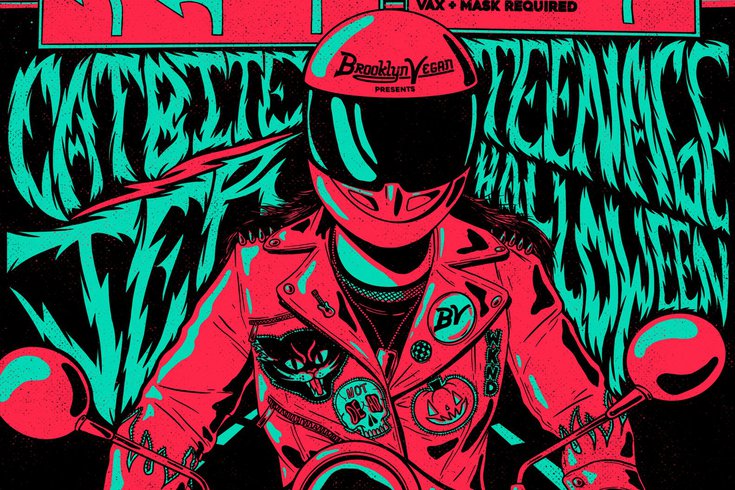 Catbite is headlining a two-stop, mini tour. The Philly band's first show is an all-ages event at PhilaMOCA at 7 p.m. on Friday, Jan. 7. Then the band is playing a 21-and-over show at St. Vitus in Brooklyn, New York, on Jan. 8.

Ska fans should break out their checkerboard Vans and pork pie hats, as Philadelphia ska-punk quartet Catbite is headlining a two-stop, mini tour next month with a popular YouTube cover artist.

Catbite is playing two shows next month, including an all-ages event at PhilaMOCA at 7 p.m. on Friday, Jan. 7. Then the band is playing a 21+ show the following night at St. Vitus in Brooklyn, New York.

Tickets for the concerts cost $15 and will go on sale at noon Friday on the band's website. Vaccines and masks are required for both shows. Catbite also has a sold out show with New Jersey ska-punk legends Streetlight Manifesto this Saturday at Union Transfer.

& we’ve got JER (@Skatunenetwork) and @tnghllwnband with us for both of them!!!

*ON SALE FRIDAY AT NOON//LINK IN BIO*

Catbite is still a relatively underground band signed to ska label Bad Time Records, but their music videos for tracks like 'Can't Give You Love' and 'Scratch Me Up' from their 2019 self-titled album have garnered roughly 15,000 and 20,000 views, respectively.


At the Philly show, Catbite will be joined by Teenage Halloween, a ska band from Asbury Park, New Jersey, and punk act Take Today from Burlington County. They will also play as the background band for solo Florida-based ska-punk artist JER.

JER, full name Jeremy Hunter, is also the trombonist for long-running ska-punk act We Are the Union, but is perhaps best known for their youtube cover channel Skatune Network.

There, the multi-instrumentalist has largely single-handedly recorded and produced hundreds of ska-punk covers of everything from chart-topping pop tracks to underground emo anthems.

Philly-area bands Hunter has covered include Modern Baseball, Tigers Jaw, Title Fight and Kississippi. Some of Hunter's most popular covers include renditions of songs by Billie Eilish, My Chemical Romance and Blink 182.

Hunter's channel is also where Catbite debuted their new album 'Nice One,' which came out in August. It can be streamed on Spotify, Apple Music and Bandcamp and the vinyl can be pre-ordered on Bad Time's website.

JER has also collaborated with Catbite on covers of 'Monster Mash' and punk-turned-pop band Paramore's hit 'Still Into You.'

Ska is a style of pop music distinguishable by its guitar riffs and choppy horns which can trace its roots back to Jamaica in the 1950s.

The genre spread globally with the rest of the Jamaican diaspora and became particularly popular in England, a prime destination for Jamaican immigrants in the late 20th century. There, ska fused with the native British pop and rock music to form the earliest iteration of ska-punk, typified by 1980s artists like the Specials and Madness.

These "two-tone" ska groups wore black and white checkerboard clothing to denote the multi-racial nature of this new ska sound.

Two-tone ska was popular globally, and in the 1990s a big ska-punk scene popped up in the U.S. with hitmakers like No Doubt, Sublime and Goldfinger bringing the sound to the masses.