The comedian, joined by Rajat Suresh and Jeremy Levick, held a hilarious mirror up to the mighty JRE podcast 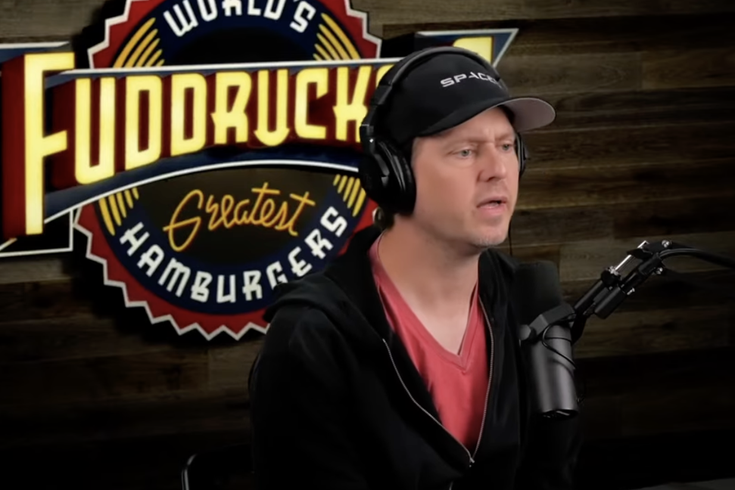 Comedian Tim Heidecker made a parody of 'The Joe Rogan Experience' podcast on Thanksgiving, teaming up with Rajat Suresh and Jeremy Levick for a 12-hour loop that serves as a clinic in satire.

Joe Rogan's massive popularity carries with it the kind of cultural sway that critics can only deny at their own peril.

It has become far too easy to hate on Rogan's increasingly formulaic diet of fringe-soaked humor and outrage, a media obsession that the comedian-podcaster largely brings on himself with ill-informed remarks about COVID-19 and his simplistic backlash against woke excesses in America.

Gradually, over the course of the pandemic, Rogan has taken over the news cycle as a favorite punching bag. He'll say or endorse something legitimately stupid, but then he'll get roasted for it in a smarmy way that reinforces the very disaffection that keeps him popular. He's the relatable voice for a bastardized ideal of free-thinking individualism that has lost its composure and the all-important f**** left to give for regaining it.

"When I say something stupid, I’m not thinking about what I’m going to say before I say it," Rogan admitted after he steered young people away from COVID-19 vaccines, only to later dish medical advice to Packers quarterback Aaron Rodgers (as if the reigning MVP of the NFL wouldn't hang that out there for Rogan fans to eat up).

Rogan's overly cavalier approach to having an "open mind" — functioning almost as a public anti-intellectual — is arguably more of an across-the-board issue than his vaccine refusal. It's much easier for those who are not ignorant about immunology to counteract misinformation than it is for anyone to grapple with the hard-ass spirit of inquiry that makes Rogan such easy listening, especially for anyone who's sick of political correctness, yet less nuanced and articulate about it than, say, Bill Maher.

What's truly challenging with Rogan fans is trying to convince them that his mellow charm thrives on a brand of contrarianism that's tailored more for effect than rigorous discussion — not the other way around — and that this equation matters when it comes to bandying ideas and behaviors across wider social domains as if they're gospel.

Part of the problem is that an episode of "The Joe Rogan Experience" can run for well over three hours, making the banter of a fed-up celebrity and his friends far too influential for the good of his most loyal and least discerning listeners —overwhelmingly, men who love hearing themselves talk, too.

The irony of such a long introduction is not lost on this writer as a segue to sharing the masterful Rogan satire that comedian Tim Heidecker did on his "Office Hours" podcast over the Thanksgiving holiday. It may be the single most effective way for Rogan's fans to step back for a moment and tangle with their juggernaut podcast of choice.

Heidecker, an Allentown native and Temple University graduate, is best-known for the web series "On Cinema" and his past work on the absurdist Adult Swim hit "Tim and Eric Awesome Show, Great Job!"

Instead of the usual call-in format for "Office Hours," Heidecker invited guests Rajat Suresh and Jeremy Levick on the show for a 12-hour conversation in the style of "The Joe Rogan Experience." (Don't worry, it's only one hour on loop).

Heidecker's SpaceX hat, worn in reference to Elon Musk's famed sit-down with Rogan, is really the least of his skillful portrayal of the podcaster. Everything from his facial expressions to his cadences and conversations about what's gone wrong with the world perfectly add up to a pretty believable Rogan podcast.

As expected, the satire traverses such topics as cancel culture and Rogan's usual bag of health hacks, but it also puts on display a brilliant balance of mockery and sincere play-acting of Rogan's earnest intent as a host. For those who prefer to see this in doses, many on Twitter have praised Heidecker and singled out some standout moments.

Tim Heidecker’s the funniest dude on the planet pic.twitter.com/z4y15eVnXa

The best thing about the Tim Heidecker Joe Rogan parody livestream is despite being almost 12 hours long, you can click on any point in the video and there will be something fucking hilarious within a few minutes.

Real satire is hard to come by and this is the genuine article https://t.co/E0cvGNTiKc

Cannot get over the perfect parody of JRE that Tim Heidecker, Jeremy Levick, and Rajat Suresh did. I have no idea how none of them broke character during Rajat’s insane rant about religion 😂 Words don’t do it justice.

Until it was edged out last week by "The Always Sunny Podcast," "The Joe Rogan Experience" held a strong grip on the lead as Spotify's top-performing podcast. Rogan has lost a bit of traction since switching from YouTube to Spotify, where his show has been criticized by fans and detractors alike, but his dominance in the format is still undeniable.

There is a contingent of Rogan fans who say they enjoy his podcast mainly for its guests, and that the host simply does a good job of fostering long-form conversation without intruding too much.

The entertainment value in that is obvious, no matter how much Rogan stumbles or leans into undermining himself, but it has also become painfully clear that Rogan's brand is hitting some turbulence that makes it less redeeming as an off-beat listen than it once was. He needs to sort that out if he ever wishes to evolve his anti-establishment appeal in a way that doesn't keep making the rotten establishment, on balance, look more sane and benevolent by comparison.

The moment of clarity may well be Tim Heidecker parroting Rogan's current trajectory with an uncomfortable degree of accuracy, holding up a mirror for his supporters to see themselves. This should hit differently than the low-effort hit pieces that tend to come after Rogan freshly makes a fool of himself. Too often, the backlash pretends that Rogan isn't powerful or likable enough to withstand it. He is both. The polarity of the pandemic has simply put him in marked ideological territory that any casual Rogan listener could have predicted.

But it would be a very good sign if an avid fan of "The Joe Rogan Experience" is able to feel in on the laugh with Heidecker's spoof. He's one of the few people in comedy truly up to the task.