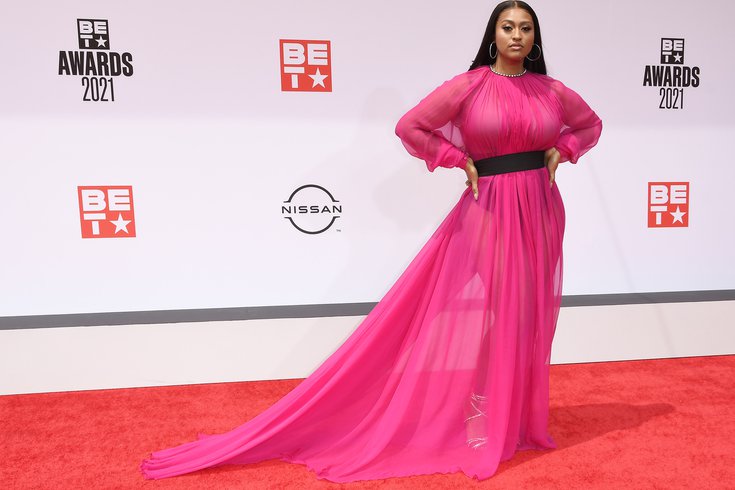 Jazmine Sullivan will head out on the road this February and March, visiting over a dozen cities on "The Heaux Tales Tour" with one notable exception: Philadelphia. Pictured above is Sullivan arriving at June's BET Awards, where she won Album of the Year.

Jazmine Sullivan is continuing her busy year as she announced "The Heaux Tales Tour" on Twitter Tuesday afternoon, following a series of hints to her fans on social media throughout the day.

The tour will begin in Vancouver, British Columbia on Valentine's Day, and will travel across North America through late winter. Missing from her list of tour stops, though, is one notable city: Philadelphia.

"And Philly, I didn't forget you, stay tuned," she tweeted, hinting at a possible future appearance in her hometown. She is currently scheduled to perform in the WDAS Holiday Jam at The Met Philly on Dec. 17 with Johnny Gill and Eric Roberson. A limited number of tickets are still available.
Sullivan will make four stops in California in February, playing in San Francisco, Oakland, Sacramento, and Los Angeles. She'll head to Texas, where she'll perform in both Irving and Houston, before making her way through two stops in North Carolina, and stops in Louisiana, Oregon, Washington, Georgia, and Tennessee.

The closest shows to the Philadelphia area are in Brooklyn, New York, on March 17 and Washington, D.C., where the R&B singer will perform on March 20.

And Philly, I didn’t forget you, stay tuned.🖤 pic.twitter.com/btyIZt4sXN

"Heaux Tales" is Sullivan's fourth studio album, following "Reality Show" in 2015. Her latest release has garnered a lot of media attention, and has resulted in the 2021 BET Award for Album of the Year, as well as Album of the Year and Best Female R&B/Soul Artist at Sunday's BET Soul Train Awards.

She was also recently nominated for three Grammy Awards, including best R&B Album, R&B Song and R&B Performance for lead single "Pick Up Your Feelings."