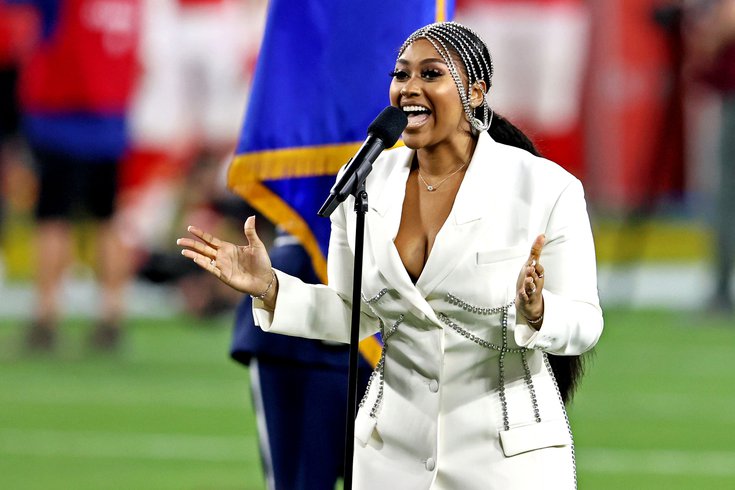 Jazmine Sullivan's 'Heaux Tales' primarily was recorded in the musician's Philadelphia home. On Sunday night, Sullivan won Album of the Year at the 2021 BET Awards. In the photo above, she is shown shown singing the national anthem before Super Bowl LV in February.

The singer-songwriter's 14-track EP was nominated for the honor along with albums by The Weeknd, Megan Thee Stallion, DaBaby, Nas and Chloe X Halle.

Sullivan was joined on stage to accept the award by her mother, who was diagnosed with breast cancer two years ago and is now in remission. The musician said that they "would've never expected to be here" and "didn't see any of this happening" given the events of the past two years.

"(My mom) is my prize, this is my gift," Sullivan said. "It means more to me than anything that she's here with me. She's supported me all my life. She's pushed me and led me all my life, so I'm so grateful for her."

"This award is bigger than me," Sullivan said. "It's for all the women, all the Black women that are amazing and strong that have inspired me all my life. I'm so glad that I was able to tell part of our stories. I hope I did y'all proud."

Sullivan also performed her new single "Tragic," as well as one of the album's hit songs titled "On It" featuring singer Ari Lennox, during Sunday night's awards ceremony.

Sullivan also was nominated this year for Best Female R&B Artist, but lost out to H.E.R.

When it was released in January, "Heaux Tales" debuted at No. 4 on Billboard's Top 200 Albums chart. It became Sullivan's highest-charting album and the second top-10 album of her career following her debut record "Fearless" in 2008.

"Heaux Tales" includes hit singles like "Lost One," "Pick Up Your Feelings" and "Girl Like Me" featuring H.E.R. The critically-acclaimed album was primarily recorded in Sullivan's home in Philadelphia.

A graduate of The Philadelphia High School for Creative and Performing Arts, Sullivan sang the national anthem at Super Bowl LV in February alongside country music star Eric Church. She also was featured earlier this year on NPR's "Tiny Desk (Home) Concert" and "The Tonight Show with Jimmy Fallon."

The 2021 BET Awards ceremony, which was held in Los Angeles on Sunday night, was hosted by actress Taraji P. Henson. The event celebrated achievements in music, movies, television and sports from over the past year.

Megan Thee Stallion earned the most BET Awards this year with four awards, including Best Female Hip Hop Artist. The complete list of award-winners can be found on BET's website.