Celebrating the six men who played the 3 Stooges

Get your Stooge on 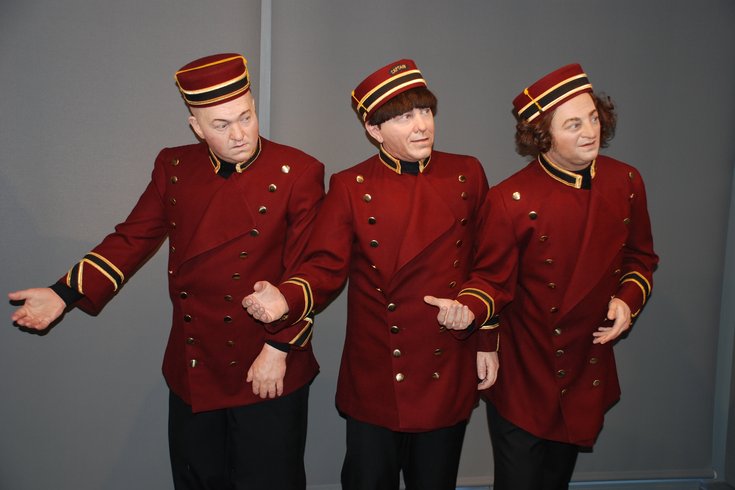 Wax figures of the 3 Stooges welcome people to the Stooge museum in Ambler.

There's a photograph of a Buddhist monk drinking from a mug featuring images of The Three Stooges. We'll never know if the monk was a fan of the trio, but the fact that he and the cup were in the same room is pretty remarkable.

This picture and thousands other items are on display at The Stoogeum, a three-story building in Ambler dedicated to preserving the memory of the bumbling bumblers Moe Howard, Larry Fine, Shemp Howard, Curly Howard, Joe Besser and Joe DeRita.  The Stoogeum's collection has about 100,000 artifacts that includes about 13,000 photographs that have been digitized.

This summer a number of area theaters are hosting Stooge festivals and the museum itself will be holding special open houses, giving new generations an opportunity to discover the guys who perfected physical comedy before Steve Carrell, Jim Carrey or Melissa McCarthy.

Much of the Stoogeum's collection was obtained by Gary Lassin, who married Larry Fine's great-niece. The Stooges were a favorite of his before he met his wife.

“Yes, I was a fan of all those tv shows I watched as a kid, so I loved “Get Smart” and the Beverly Hillbillies, but I had a softness for the Stooges because they were on every day after school, so I always liked them,” said Lassin, who opened the Stoogeum in 2004. “But there was no collecting as a kid. You just watched them and laughed. It wasn't until I became an adult (and) was looking for a hobby.”

But being part of the family wasn't much help in building the collection:

“Yes, I'm a relative, but unfortunately, Larry's family didn't save anything!” he said.

“They saved the letters, handwritten letters they had sent to him, and his brother Moe Fine had a few Stooges comic books: there were hundreds of comic books and he had two copies!” said Lassin. “There were 50 records and he had two or three records; he didn't make sure he had every single thing that they did.” 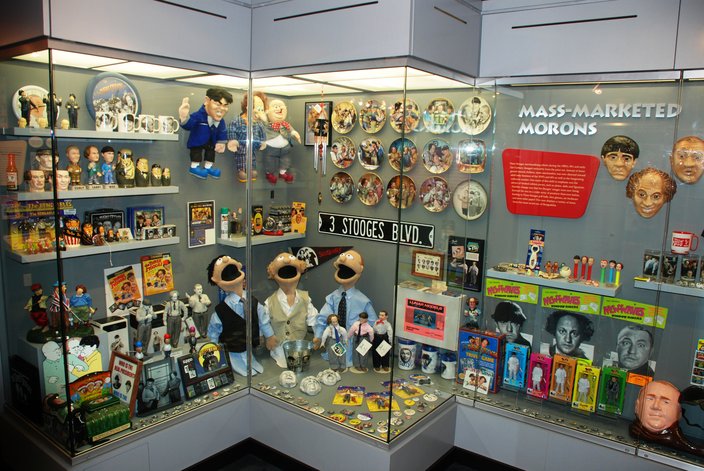 Being stupid was big business.

Two events in his life changed him from being a hobbyist to a serious collector and preservationist.

His wife had a life-threatening health issue a few years ago, which made Lassin take stock of his own mortality. Lassin had also collected troves of material, but few people knew what he had and he was running out of space to keep it. That's when he started the museum.

He said his favorite item is Shemp's discharge papers from the Army, which he joined during World War I.

One reason it's important to him, he said, is because it has Shemp's real name – Samuel Horowitz – on it.

When he began collecting, “stuff was sort of hard to find,” said Lassin. “There weren't many other people collecting.” He would pour over auction catalogs and visit memorabilia shows. “Sometimes I'd spend five hours there and come away with a $5 comic book,” he said. Over time he built a network of dealers, who knew he was serious about collecting and they would put him in touch with other dealers.

And he learned an invaluable trick of the trade:

“When (dealers) called me and they had something, and they wanted X dollars for it and I said sold, X dollars. I didn't say, half an x, and I found that this was very effective because when they came up with something the next time, I got the first call, because I didn't nickle and dime them for a lower price. I paid fair price. I learned early on you had to pay, you couldn't nickle and dime them. By doing that you got opportunities to pick up more stuff, guys who nickled and dimed, they didn't get called back,” he said.

Lassin said he had professional museum staffers help organize the material. “They didn't know anything about the Stooges, and I didn't know anything about museums,” he said. The registrar has a masters in Museum Studies from New York University: the Stoogeum's archivist has a masters in Library and Information Sciences from the University of Pittsburgh.

Now retired from the mail order business, Lassin spends his time with the museum and watching his twin grandsons grow up.

The vaudeville act that took over the world

But they eventually went on their own. When Shemp left to work in films, Curly took his spot. After a debilitating stroke ended Curly's career, Shemp rejoined the act. When he died, Joe Besser took his place. When he left, Joe DeRita replaced him.

They made 190 short films for Columbia Pictures, which ran on average 16- to 18-minutes and were shown in theaters between full-length movies. According to Michelle Squiccimara, the museum's registrar, the Stooges' shorts aired for the first time on television in late 1958 and sparked a Stooges' resurgence that led to personal appearances and later feature films and an animated cartoon series in the 1960s.

More than 25 years after the last Stooge passed away, their humor (or lack of humor, in some circles) still pervades our culture: An issue of Texas Monthly Magazine had a cover with Moe, Larry and Curly drawn by an artist on the cover with the headline, “The Best and Worst Texas State Legislators.” Cartoons such as “Dilbert” and “The Far Side” featured the boys. Filmmakers Peter and Bobby Farrelly (“Something About Mary”, “Me, Myself and Irene”) made a feature film in 2012, “The Three Stooges,” that was part comedy, part homage to the group. 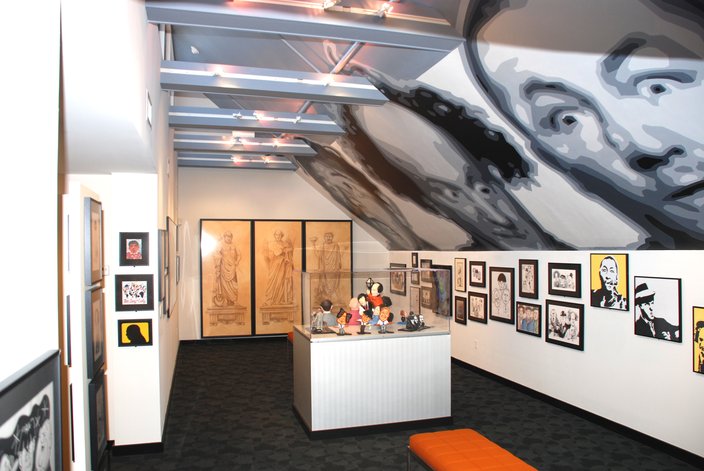 The museum showcases thousands of photos and art works celebrating the Stooges and their physical comedy.

When not making films, the Stooges went on the road. On display is a clipping from an army newspaper dated May 22, 1942, about the Stooges appearing at Camp Cooke in California.

Squiccimara said, “many visitors to The Stoogeum are not necessarily hard-core fans, but accompany friends who are.  They expect to be bored by a collection they are indifferent about, but soon find that the museum is a great entrance into the fascinating world of the Three Stooges."

Nearly every inch of space on the first two floors is filled with memorabilia. There are exhibits of important collaborators, such as director Jules White, actress Christine McIntyre and actor Emil Stitka; one wall is filled with glossy photos of actors and actresses who appeared with the Stooges. You've probably never heard of them, except for Lloyd Bridges. The “Airplane” and “Hot Shots” star played a bit part in a 1943 Stooges short, “They Stooge to Conga.” Movie posters and scripts are displayed.

There are life-sized bronze figures of Moe, Larry and Curly dressed as bellboys as they were in their 1943 short film, “Idle Roomers,” all gesturing towards the exhibits. There's a huge poster of the Stooges' first full-length feature film, “Have Rocket Will Travel.” There's a game that lights up and plays music, most notably the act's theme songs. On walls are posters in foreign languages. One from Brazil presents, “3 Patetas” – patetas translates into English as “goofy.”

The Stoogeum is open Thursdays 10 a.m. To 3 p.m. Reservations are required for Mondays, Tuesdays, Wednesdays and Fridays, between 10 a.m. and 4 p.m. Admission is $10 for adults; $8 for seniors, military personnel and students; children 12 and under are free. There will be open houses on June 21, July 19 and August 16, from 10 a.m. to 3 p.m. No reservations are needed.

Lassin is often asked why the Stooges were and still are popular.

Children enjoy them, he says, “because they are like human cartoons. If a bomb blows up at the Stooges' feet, they emerge with tattered and charred clothes (but still alive), a human version of what would happen to Wile E. Coyote in the cartoons. Also easy to see kids identifying with Curly, a true man-child, getting bossed around by parent-figure Moe. Again this is just my take on it.” 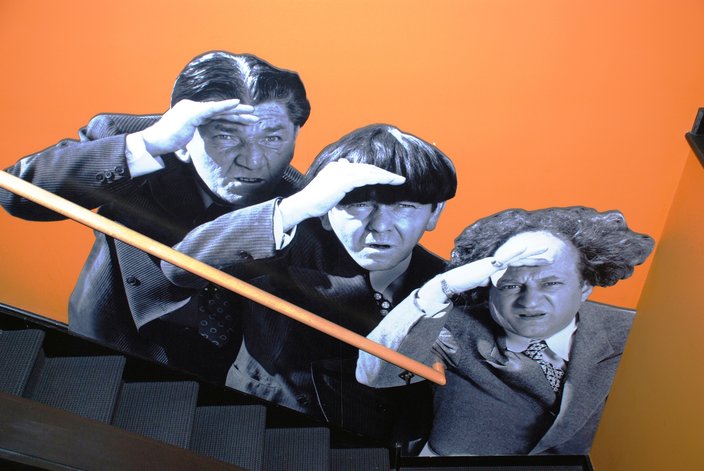 In the end, there were six different Stooges.

As for adults, “My thinking is their popularity stems from the fact that they make you feel smart; they're so dumb that no matter how dumb you are, you feel smarter than them, and that's a good feeling,” he said. “I was thinking this is the Stooges' raison d'etre. And there's all kinds of other things, they got away with stuff – you'd love to kick your boss in the rear end, throw a pie in a society matron's face.

"They got away with these things," Lassin said. "There's sort of an underdog thing, a fringe of society, they're outcasts, they're not part of the mainstream. A lot of people identify with that.”