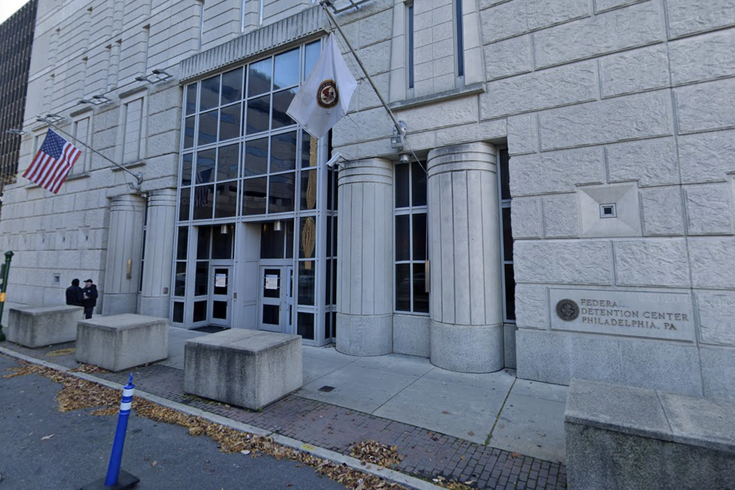 The Federal Detention Center at 700 Arch St. was among several Philadelphia buildings targeted by vandals on Dec. 31, 2020. Jacob Dean Robotin, 25, of Willow Grove, faces federal charges for allegedly possessing a Molotov cocktail, discovered during his arrest that night.

Jacob Dean Robotin, 25, was charged Tuesday for his involvement in the destruction that night, which resulted in seven arrests at the time.

A large group of people wearing dark clothing vandalized the Federal Detention Center at 700 Arch St. and the Robert C. Nix Federal Building and U.S. Courthouse at 33 South Ninth St., among other buildings. Members of group spray-painted the buildings, broke windows and set off fireworks before police apprehended three people in the area of 600 Sansom Street, prosecutors said.

Windows of a sheriff's van were smashed and there was anti-police and anti-prison graffiti found on the walls of the Federal Detention Center, according to police. Building damages were estimated at $3,000.

Robotin was among those stopped by police that night. He was found wearing a green, military-style backpack and pants with spray-paint on them.

Inside a bag Robotin had, officers allegedly found a glass bottle containing liquid and fuses, along with some tape inside Robotin's backpack. Officers said there was a strong odor of a flammable liquid coming from inside the glass bottle. Police also found additional fuses, lighters, camping heat sources and fireworks. The items were transferred to the FBI.

The Explosives Unit of FBI's Laboratory later determined that the glass bottle contained gasoline. Together with the fuses, it comprised a homemade firebomb, or Molotov cocktail, investigators said.

Robotin was arrested Tuesday and made his first appearance in federal court. He was released on unspecified conditions.

At the time of the incident, Philadelphia Police Chief Inspector Mike Cram said several Molotov cocktails and other suspicious devices were recovered from areas near the federal buildings.

"Homemade Molotov cocktails can be incredibly dangerous," Acting U.S. Attorney Jennifer Arbittier Williams said. "Here, the defendant is alleged to have carried all of the materials needed to endanger the lives of many people. Luckily, Philadelphia Police arrested Robotin before anyone was hurt. Let this case serve as a warning to others who might consider acting in a similar way – possession of a Molotov cocktail is not protected speech nor harmless hijinks; it is a serious federal crime."

If convicted, Robotin faces a maximum possible sentence of 10 years in prison, followed by three years of supervised release and a fine of up to $250,000.