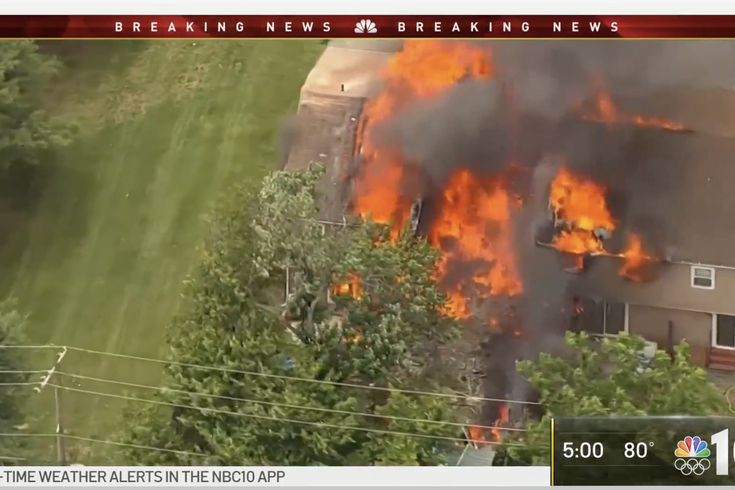 Flames engulfed several townhomes in the Eagleville section of Lower Providence Township, Montgomery County on Thursday. The incident stemmed from a police standoff with a man who had pulled a gun on a township code enforcement, prosecutors said.

An armed man who was involved in a police standoff that escalated into a series of house fires Thursday has been found dead in the rubble of his Eagleville home, Montgomery County prosecutors said.

Thomas Razzi, 65, remained in his property during a chaotic scene that destroyed two other townhomes and caused damage to another three, investigators said. His body has been positively identified.

When the code enforcement officer entered the home, Razzi displayed a firearm, according to investigators. The officer left the property and was able to ask a neighbor to call police. The officer also called 911 and explained the dangerous situation.

Two Lower Providence policer officers responded to the scene and confronted Razzi in front of his home. Razzi was not armed at the time and retreated into his home, slamming the door behind him, prosecutors said.

Additional police officers arrived at the scene and established a perimeter around the property.

#BREAKING: Authorities say they've found the body of the homeowner responsible for an inferno in Eagleville on Thursday. The body of 66-year-old Thomas Razzi was found in the burned out rubble. https://t.co/dv4MOA0Mcm

Officers and firefighters safely evacuated the surrounding homes before the flames spread from Razzi's property to the nearby properties. Displaced residents were put in contact with the Red Cross and accommodations were provided to those who needed them.

A preliminary investigation found that chemical-used mix fireworks, combined with ammunition inside Razzi's home, were likely the cause of the explosions and gunfire. Razzi made his own fireworks and had several firearms and ammunition inside his home, prosecutors said.

An investigation into the incident remains ongoing and anyone with information is asked to contact the Lower Providence Township Police Department at (610) 539-5901.