The archbishop says the event will show the importance of families 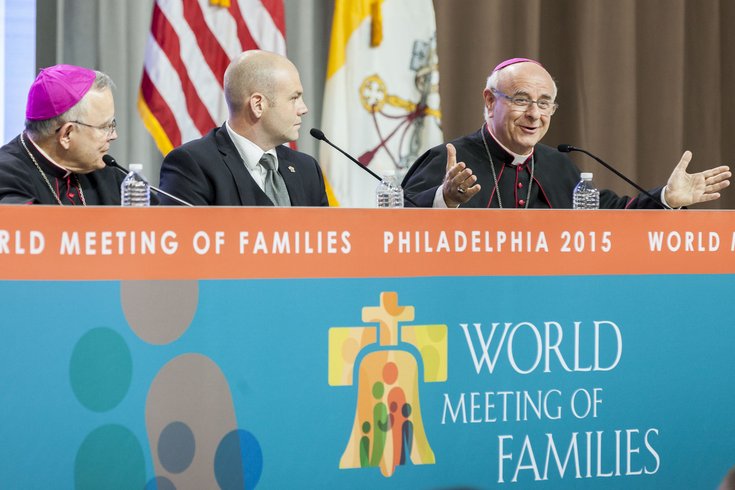 Archbishop Vincenzo Paglia, President of the Pontifical Council for the Family, (right) speaks at the World Meeting of Families opening press conference along with Philadelphia Archbishop Charles J. Chaput and Ken Gavin, director of communications for the Archdiocese of Philadelphia, at the Pennsylvania Convention Center, Tuesday, September 22, 2015.

Archbishop Charles Chaput said he hopes the World Meeting of Families will encourage Catholic families and equip them with the tools to witness to unbelievers.

"In the early church, the reason it began to grow was because people saw happy Christians living in happy families that were committed one another in a fidelity beyond what they saw in the world around them," Chaput said. "I hope that we both encourage those that are here and that we find the tools needed to be an incredible witness of this wonderful understanding of the family to the world around us."

Chaput was joined by Archbishop Vincenzo Paglia, president of the Pontifical Council for the Family, at a Tuesday morning press conference celebrating the start of the World Meeting of Families, a triennial event emphasizing the importance of families.

More than 17,500 people from 100-plus countries have registered for the congress, making it the largest World Meeting of Families ever held.

Paglia, who at times spoke through a translator, echoed Chaput's expectations for the four-day Congress, which will be followed by a weekend visit by Pope Francis.

Paglia said the World Meeting creates a new enthusiasm in which individuals recognize it is far more important to be married with a family than to be chasing a career or money as a single individual. He stressed that family is important for all people in all cultures.

"Christians built a family in order to transform, in a familial way, the world, the cities, the states," Paglia said "In (a) sense, this meeting in Philadelphia, in a country which is not Catholic in the majority, is really, really important."

Asked whether his definition of family extends to couples in same-sex marriages, Paglia said family must be defined by the way God established it.

"We have to underline the dignity of each person," Paglia said. "But family is meant as God, at the beginning of creation, established."

Pope Francis will arrive on Saturday, when he will speak on immigration at Independence Hall and participate in the Festival of Families on the Benjamin Franklin Parkway. He will serve a papal Mass to a predicted crowd of 1.5 million people on Sunday.

Paglia insisted there will be enough communion wafers.