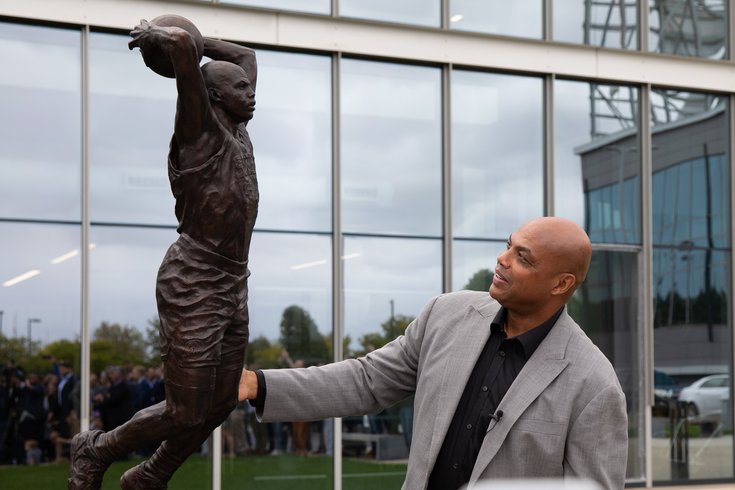 Charles Barkley admires his sculpture at the Philadelphia 76ers Training Complex in Camden. Barkley recently said his daughter, Christiana, is named after the Christiana Mall in Delaware.

As a person named Michael, I don't have much ground to talk about the creativity of first names. My parents opted for a classic over second-place Max and I joined the Mikes of the world, sometimes mixing it up with a Mikey if I happen to like it.

Some parents are much bolder in their choice of names. Body builder John Brown, a three-time Mr. World winner, has three football-player sons who are named Equanimeous, Aman-Ra and Osiris St. Brown. That's some inspired naming. Same goes for Chubba Hubbard, Seranthony Dominguez and Laviska Shenault, who's actually a junior. Those are some distinctive first names.

It's not uncommon for parents to draw from geographical locations to pick the names of their children. There's Penn Badgley, Paris Hilton, Winona Ryder and Orlando Bloom, to name a few.

Then we have Charles Barkley, the Sixers legend and "NBA on TNT" analyst, who said this week that his daughter, Christiana, is named after the mall in New Castle County, Delaware. He specifically said the mall, not the small town in which it's located.

Here's Barkley talking to colleague Ernie Johnson during a new episode of their podcast, "The Steam Room."

Charles Barkley says he named his daughter after a mall in Delaware pic.twitter.com/AdJpFgoWjq

"There's a Christiana Mall in Delaware that I used to always go by," Barkley said. "That's how she got her name, Christiana.

"You named your daughter after a mall? Why?" Johnson asked.

"I don't know, I just liked the mall," Barkley said.

It's a pretty good mall, and it's especially popular in the tri-state area because Delaware doesn't have a sales tax. And, for what it's worth, Christiana invokes the name of Christ. It's not as if Barkley called his daughter King of Prussia.

Christiana Barkley got married earlier this year to Ilya Hoffman. They met while hanging out with a bunch of Villanova University fans. Barkley graduated from Villanova in 2011. She was born in 1989, when Barkley was still on the Sixers and would have had opportunities to pass the Christiana Mall with some regularity.

Hoffman, who isn't much of a sports fan, recognized the Barkley name not because of Chuck's Hall of Fame career, but because of "Space Jam," he told The New York Times.

The next time you visit the Christiana Mall, you can picture the gears in Charles Barkley's head turning as he decided, "If I ever have a daughter, I'm going to name her after this fine shopping mall."