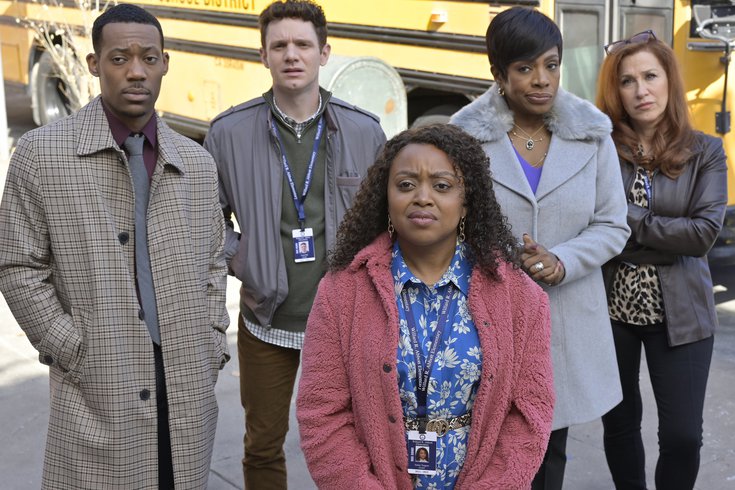 From creator and Philly native Quinta Brunson comes 'Abbott Elementary.' which chronicles the lives of teachers in an underfunded public school. The mockumentary-style sitcom premiered on Tuesday night, with a second episode scheduled to air at 9:30 p.m. on Jan. 4.

ABC's new mockumentary-style sitcom "Abbott Elementary" premiered on Tuesday night. The show's creator and star, West Philadelphia-native Quinta Brunson, documented the first episode on Twitter, where critics and audiences, alike, followed along as they watch the group of teachers in a fictionalized, underfunded Philly public school.

"Abbott Elementary" revolves around Brunson's Janine Teagues, a newbie second grade teacher at the school, who, along with her team of coworkers, brings to light major issues of underfunding in public schools and the realities for teachers across the country.

In the first episode, Abbott Elementary's teachers are tasked with coming up with quick solutions to the lack of funding for their school. Like to solve one issue – teaching students social studies using a book printed President George W. Bush administration – Janine tapes photos of the most recent three presidents into the book. Principal Ava brings in a camera crew to document the teachers' experiences, avoiding confrontation about the money woes.

Barbara Howard, the veteran kindergarten teacher at Abbott Elementary, is based on Brunson's mother, who was a public school teacher for more than 40 years. Brunson told 6ABC that she used to spend a lot of time in her mother's classroom, which helped her understand what being a teacher was really like.

Brunson, who gained popularity online by posting comedy videos to her Instagram account, worked for BuzzFeed's video production department for several years before leaving in 2018.

Since then, she has starred-in several other high-profile television comedies, including HBO's "A Black Lady Sketch Show," where she was featured in several skits with fellow "Abbot Elementary" star Tyler James Williams. She also voices characters in Netflix's "Big Mouth" and Adult Swim's "Lazor Wulf."

Early critical response ahead of the premiere signaled that "Abbott Elementary" is a show to watch out for. Decider's Joel Keller noted that the show is one of few network sitcoms he has recommended in years, adding in his review that "Abbott Elementary is not only funny, but its pilot sets up a workplace family that can endure for multiple seasons."

"'Abbott Elementary' is full of moments like that, that mine comedy from the push-pull between can-do optimism and clear-eyed realism," according to The Hollywood Reporter, adding that, like its sitcom predecessor "Parks and Recreation," provides the potential to be an incredible show, even if it may need some "fine-tuning" in the beginning.

Brunson followed the special premiere of the pilot episode on Twitter, where audiences raved about the network sitcom. Here is what some fans said on social media last night.

Within the first minute, an accurate observation was made: there's supposedly no city funding for education but there's always funding for building or upgrading sports stadiums. 💯 @AbbottElemABC @quintabrunson #AbbottElementary

"I believe the children are the FUTURERRRR...." #AbbottElementary As a 20+ year elementary educator 10 minutes in I wholeheartedly endorse this show. #teacherlife pic.twitter.com/Fl9RKPoOob

@quintabrunson As a teacher (currently completing my 24th year) I would just like to say thank you for the giggles…I feel seen.😂 #AbbottElementary pic.twitter.com/B6UtKKCuZr

Viewers on Twitter also made some comparisons to "Parks and Recreation" and the U.S. adaptation of "The Office," whose British counterpart is often credited with the popularization of the mockumentary format, alongside 2001's "Trailer Park Boys."