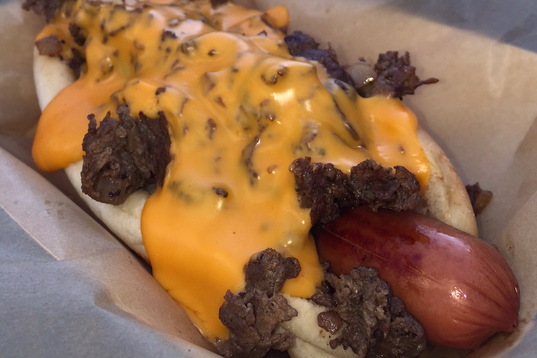 Philadelphia's signature comfort food may be a model of simplicity, but that doesn't mean the beloved cheesesteak can't be tweaked to match a given occasion.

The Los Angeles Dodgers paid homage to the cheesesteak earlier this year when the Phillies went cross-country for a series in late April. Already known for the legendary Dodger Dog, the concessions concocted a ballpark frank with steak, whiz and carmelized onions plunked on top. The fans in L.A. must have approved because it's coming back for the Phils' 4-game series beginning Monday night, according to SBNation.

Dubbed the Super Dodger Dog, it is a masterful colossus of calories that should probably be given a try here in Philadelphia. Anything to draw people to Citizens Bank Park, at this point.

Credit is owed to the Dodgers concession stands for not managing to somehow screw this up the way the Washington Nationals did in April.

The "cheesesteak" hot dog at @Nationals Park just has cheese and onions. No steak. #youredoingitwrong pic.twitter.com/oLHpkIT3Ru