Chelsea Handler on life, death and therapy after Trump

'I was not going to let him rob me of my happiness.' 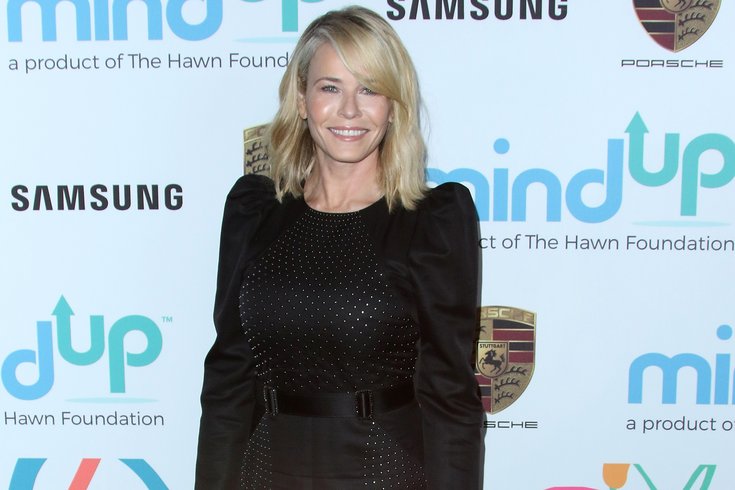 Chelsea Handler at the Annual Goldie's "Love In For Kids" hosted by Goldie Hawn held at the Ron Burkle's Green Acres Estate on November 03, 2017 in Beverly Hills, CA

While chatting up her new book "Life Will Be the Death of Me" and her tour, which stops Friday at the Met Philadelphia, Chelsea Handler spoke of evolution.

The veteran comic has morphed from a frenetic Type A entertainer to a somewhat more relaxed performer. Handler, 44, called PhillyVoice from New York to talk about the impact of therapy, why women need to speak up and her perception of Philadelphia.

Q: You used to have so many plates spinning when you came to town. This time you're just doing your show after writing a book. What happened?

Q: Were you always so intense?

A: If you saw me in high school, you would have run in the other direction. I was steamrolling through that place like I owned it. I was like a bulldozer.

Q: You once said that if Donald Trump became President that would be the end of civilization. How did the result of the election change your life?

A: I had to see a psychiatrist after the election. That inspired my book, which is about harnessing all of my outrage. I had all of these negative connotations with therapy. I associated words like universal, gratitude and kale with therapy and it made me nauseous. But I discovered why people love therapy. It's so valuable. I had to stop being such a baby and embrace it.

Q: Did therapy enable you to get over Trump?

A: I let Trump steal a year of my life and after I went to therapy I realized that was as far as it was going to go. I decided that I was not going to let him rob me of my happiness. The crazy thing is that all that happened with Trump worked out for me since something so positive came out of something so negative. I realized that I've made a career out of oversharing and what I wanted to overshare this time with my book and my comedy is that death is funny. I just needed to articulate that.

Q: The focal point of the book is you dealing with your brother's death 35 years ago. How difficult was it to finally grapple with that?

A: The truth of the matter is the worst thing you can do is not deal with something important. But with death, there are no shortcuts. When he died it was devastating. He was much older than me (Handler's brother Chet was 22 and she was 9). Regarding his death, I just thought all these years, 'I'm tough. I'm resilient. I can deal with anything.'  But I had to deal with it. I didn't think I could deal with it. I didn't think it was a serious enough issue. It wasn't like I was molested or raped. But I discovered that it's an issue that I can talk about it since people can relate to it. Everybody has lost somebody.

Q: It's akin to the title of your book.

A: Yes, death is part of life. That's what the book is about. It's about the horrifying moments when you laugh and cry within the same five minutes. It's powerful to share. When I processed all of this, it hit me that I can write a book about this and it will all be worthwhile.

Q: You left your show to devote some time for activism. What message would you like to get across?

Q: How concerned are you about Roe v. Wade?

Q: You've talked quite a bit about white privilege over the years.

A: I've experienced it. I got caught with weed three times with my high school boyfriend (who was African-American). Each time the police let me go and he each time he was arrested. I went back to my life in Livingston (New Jersey) and he went to prison for 14 years.

Q: You played Philadelphia often early in your career and during the run of your TV show, "Chelsea Lately". What are your impressions of Philly?

A: Philly is New Jersey's sister (laughs). It has good sports teams. I'm excited about coming in and not having a TV show to focus on. I can enjoy it this time. I'm excited.