Comedy powerhouses to perform at The Met this spring 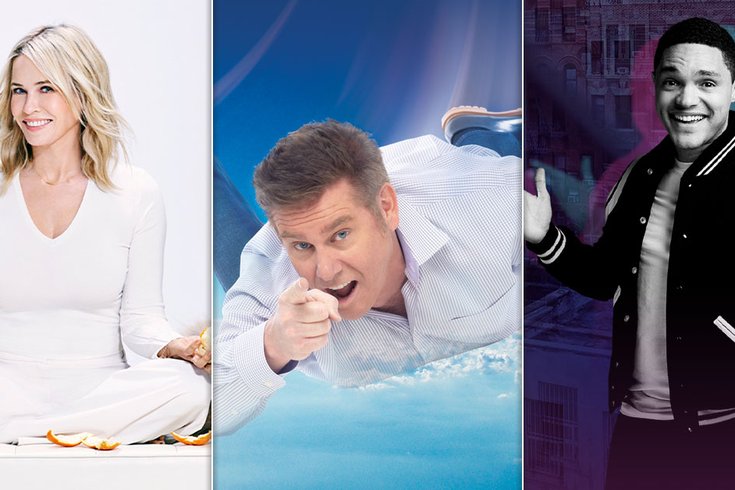 Some of comedy’s biggest names are set to perform at the newly-restored The Met Philadelphia this spring. The star-studded schedule includes an evening with Chelsea Handler on April 12, Brian Regan on April 27, and Trevor Noah on May 3. Tickets for all shows are on sale now. The Met has quickly become the premiere venue for comedy in Philadelphia, after a string of sold-out performances from John Oliver, Jim Gaffigan, The Impractical Jokers and Tyler Perry’s Madea’s Farewell Play Tour.

Lauded for her sarcastic, self-deprecating style of comedy, Chelsea Handler spent years entertaining audiences performing stand-up comedy, as a late-night talk show host on E!’s Chelsea Lately and most recently as host of Chelsea on Netflix. The #1 New York Times bestselling author is back with her first book in five years "Life Will Be the Death of Me." See her live in Philadelphia in support of her new book on her Sit-Down Comedy Tour. Every ticket will include a copy of the book.

Once called “the funniest stand-up alive” by Vanity Fair, Brian Regan is respected by fans, critics and fellow comedians alike. The beloved comedian barely ever rests from his work, visiting nearly 100 cities every year. In 2017, Regan premiered his first Netflix special ( Brian Regan: Nunchucks and Flamethrowers), and has a second special coming to the streaming service in 2019.

Best known for hosting “The Daily Show” on Comedy Central, Trevor Noah is an award-winning comedian, political commentator and television host. His remarkable career includes numerous comedy specials, a New York Times bestseller, and recognition as one of Time magazine’s “100 most influential people in the world” in 2018. Due to popular demand, Trevor added a third show at The Met Philadelphia on Friday, May 3 at 10 p.m. He will also be performing at The Met on May 3 7:30 p.m. & May 4 7:30 p.m.