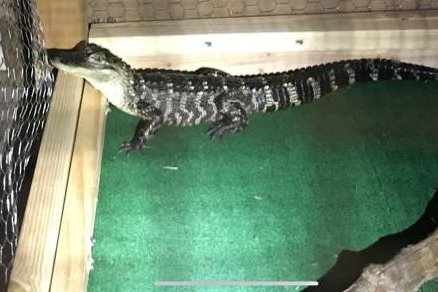 Pictured here is the alligator found in a kitchen during a drug bust by Chester County police on Feb. 8, 2019. It seems unfazed.

But when police searched in the house’s kitchen, they also found an alligator.

Chester County District Attorney Tom Hogan’s office issued a press release Thursday with information on the … unique raid that went down on Feb. 8.

“Drug dealers will do just about anything to project an image of danger in order to protect their drugs and cash. Some drug dealers use pit bulls or snakes,” Hogan said in the release. “These drug traffickers kept an alligator in the house. But at the end of the day, the police seized their drugs and money, and the alligator is headed to the zoo."

The Chester County D.A.’s office unfortunately didn’t give the little gator a name, but it was placed in the Brandywine Zoo in Wilmington, Delaware, under the care of Delaware Department of Natural Resources and Environmental Control.

The alligator will be an educational animal at the Brandywine Zoo this summer, and then taken to the St. Augustine Alligator Farm and Zoological Park in St. Augustine, Florida.

Police charged three men — Irvin Hawkins, 31, of South Coatesville; Aki Gathright, 35, of Philadelphia; and Tyrone Jackson, 40, of Columbia — with drug trafficking and related offenses, according to the Hogan's office.

According to the release, the three men have not been additionally charged with possession of an alligator.