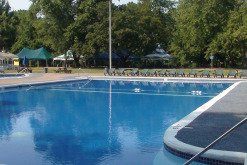 The main pool at Neshaminy Shore Picnic Park. It is unclear which pool at the park the child drowned in.

A child died Saturday after drowning in a Bucks County pool.

The child has been identified as 4-year-old Nahyer Johnson of Philadelphia, 6 ABC reports.

The incident occurred around 1:30 p.m. According to NBC Philadelphia, Johnson was pulled from a pool at the Neshaminy Shore Picnic Park.

CPR was performed on Johnson who was rushed to St. Mary's Hospital in Langhorne where the he died.

Authorities are investigating the incident.