Klondike's Choco Taco, mourned after sudden discontinuation, may return 'in the coming years'

The ice cream treat, invented 40 years ago by a Northeast Philly man, isn't dead just yet

By Noah Zucker and Michael Tanenbaum 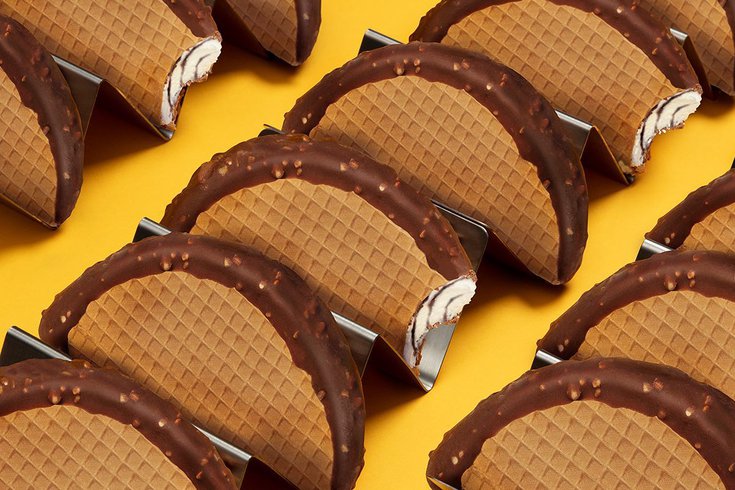 After Klondike and parent company Unilever announced that Choco Tacos would be discontinued, fans of the beloved frozen dessert pleaded for better minds to prevail. Klondike may be taking the public response seriously.

After a collective outpouring of grief over the death of the Choco Taco last month, frozen dessert maker Klondike teased this week that the delicious treat might just be going on hiatus for a while.

Avid fans of the Choco Taco wrung their hands last week when Unilever, the parent company for Klondike, announced that it would say goodbye to the nearly 40-year-old dessert that generations of kids devoured with glee.

Ulilever had said that since the company experienced "an unprecedented spike in demand across our portfolio," other products in its lineup would need to be produced in lieu of the Choco Taco.

But on Wednesday, Klondike responded on Twitter to a woman who had searched all over her area and in surrounding cities to find the last of the Choco Tacos. She took her grief online after her search was unsuccessful, and it looks like Klondike was moved by it.

We know this is disappointing - we’ve heard our fans, and we’re hoping to bring this favorite treat back to ice cream trucks in the coming years!

The Choco Taco story traces its roots to Alan Drazen, the Northeast Philadelphia native who created the dessert in 1983. At the time, Drazen was working at Jack & Jill Ice Cream, the family-run company created in Philadelphia in 1929 that's now based in Moorestown, New Jersey.

"It's one of the most iconic ice cream novelties of all time," said Drazen, who told PhillyVoice he was "somewhat surprised (and) very disappointed" by the news from Unilever. Jack & Jill Ice Cream was purchased by Good Humor-Breyers, a division of Unilever. Klondike holds the right to manufacture Choco Taco, but the patent is still held by Jack & Jill.

Unique for its time, Drazen's Choco Taco departed from the typical cone and sandwich treats that dominated the frozen dessert industry. The shell construction was a game-changer that preserved the benefit of toppings — a coating of peanuts and a milk chocolate seal — while enabling a portable way to eat it without making a mess.

The treat's origin story has become the stuff of legend. Drazen once told Eater a fantastic fable about how he envisioned the ice cream taco while on a quest in Mexico. But in reality, he said he came up with it while sitting at his desk in Jack & Jill's office.

Compared to other ice cream treats, the Choco Taco's novelty is a big reason why more than a billion of them were sold and public figures like Alexis Ohanian, the co-founder of Reddit, and Connecticut's U.S. Sen. Chris Murphy, had tweeted about keeping the product alive.

Drazen said he believes the product was probably discontinued for a number of reasons.

"My sense is that it's likely the supply chain issues, which have effected the food industry everywhere," he said.

Drazen recalled that creating the Choco Taco's supply chain back in 1983 was a challenge, as well.

It has a unique production process that Jack & Jill established through its relationship with Gold Bond, an ice cream manufacturer in Green Bay, Wisconsin. The company, later bought by Klondike, had both an ice cream factory and a sugar cone factory on opposite sides of town.

A machine at one plant had to be modified to fold the waffles into a taco shape instead of a cone. Then the shells would be trucked across town, where another machine was altered to pump out ice cream horizontally instead of vertically.

Another possibility is that despite all the sadness and nostalgia around Choco Tacos, people may love the memory of eating them more than actually buying them with any regularity.

In the early 1980s, Drazen's idea came at a time when food from south of the border was becoming mainstream.

By 1983, tacos were a household name, but they were also still exotic and trendy in many parts of the country. This made "Choco Taco" the perfect brand name for that moment.

The treat quickly became a hit at local drug stores and among Drazen's friends in the ice cream industry.

Drazen got his start in the field driving an ice cream truck for Good Humor in the 1970s. One of the company's plants was near his childhood home on Longshore Avenue. Being a driver there was one of the best jobs available in the neighborhood at the time, he said.

Chaco Tacos got their big break in 1989 when Taco Bell started selling them. While Drazen said the relationship was difficult to get started, it was an important one. In some years, Taco Bell sold as much as 20% of all Choco Tacos. This is why many incorrectly believe the chain invented them.

Taco Bell stopped selling them in 2015, but in February, the chain brought the ice cream back on a limited test basis at a handful of restaurants in Southern California and Milwaukee.

Drazen thinks the rekindled relationship, and the product as a whole, would have survived if supply chain issues hadn't arisen.

"It hasn't lost any traction due to lack of consumer interest," Drazen said. "I believe it makes the most sense that it will come back some day ... (The product) means a lot to a lot of people."

Since Jack & Jill owns the patent, the company is free to sell or license the Choco Taco to a new manufacturer.

Klondike may be realizing that the decision to jettison Choco Tacos was a bit premature. They may have underestimated just how much people want them around, and the lengths they may travel to get what's left of them.

The tweet from Klondike this week was a bit informal, but the specific mention of bringing them back in the coming years on ice cream trucks, specifically, might be a happy medium in this tale. If you want a Choco Taco badly enough, you'll need to hustle out the door.