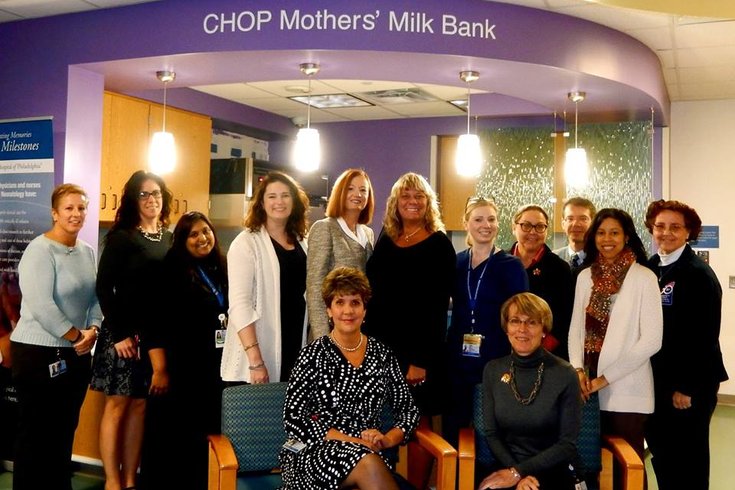 Children's Hospital of Philadelphia /for PhillyVoice

The breastfeeding and lactation team at the Children's Hospital of Philadelphia stand in front of the hospitals new human milk bank, a first of its kind for the city.

In a first for the city, the Children's Hospital of Philadelphia has opened a human breast milk bank, intended to provide breast milk for newborns and infants in the hospital's newborn and infant intensive care unit.

"For all mothers, breastfeeding is of critical importance," said Dr. Diane Spatz, nurse researcher and director of lactation for CHOP. "Human milk is actually a critical necessity.

"It can be the difference between life and death," she said. "It's very hard for babies to digest infant formula."

Spatz said that in many instances, a child's mother can't give breast milk. She cited mastectomy and breast cancer as reasons a mother might not be able to provide her own milk her child. A mother who is an active drug user would be discouraged from nursing a newborn as well, and the hospital would provide breast milk to that baby, she said.

With the unveiling of the new human breast milk bank, developed by CHOP with help from the Human Milk Banking Association of North America, Spatz said the hospital will now have donor milk on hand when babies can't get it from their own mothers.

CHOP's human breast milk bank is the first of its kind in Philadelphia and only the 18th MBANA-approved milk bank in the country.

Since it began accepting milk from local donors in 2006, it had been sent to Ohio to be cleansed and pasteurized, before returning to CHOP for use.

The process was lengthy and it carried an expense to the hospital.

"We would have to buy our donor milk back," Spatz said.

Now, Spatz said, CHOP's donor mothers – who donate about 22,000 ounces of milk a year – can express their milk at the hospital for direct use.

Donors, she said, have to go through a rigorous six-step procedure to ensure that the milk they donate is healthy and free of disease, and, all donations are volunteer. No one is paid for giving breast milk to the CHOP bank, Spatz said.

"It's one hundred-percent altruistic," she said.

The milk can be vital to saving young lives and, she said, provides infants with nutrients that they need. In fact, Spatz said that human breast milk helps babies' brains grow as well as strengthens a child's immune system.

"Human milk is something that is life saving," said Spatz.

For information on CHOP's human breast milk bank or how to donate, visit CHOP's website.