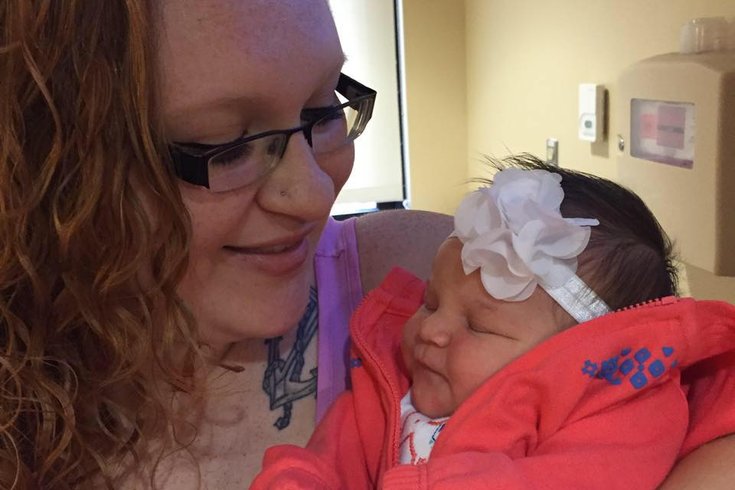 Ariana Gossard, a single mom from Pemberton, New Jersey, says that she was fired for needing to take breaks to pump breast milk for her daughter Anaira.

A Pemberton Township mom claims she was fired from her job at the Hampton Inn in Bordentown, New Jersey, because she needed to take breaks to pump breast milk for her newborn daughter.

“I lost a job that I truly loved all because I am a breastfeeding mother,” wrote Ariana Gossard in an impassioned Facebook post.

A "nurse-in" protest is being planned at the hotel this Sunday, Gossard told PhillyVoice.

Gossard declined to be interviewed, saying she has hired a lawyer, but her Facebook post explained what happened in detail. Messages repeatedly left with the hotel's management for comment were not returned.

The 21-year-old mother worked at the hotel for two years before going on maternity leave in May. She was scheduled to return to work on Aug. 24. First, she sat down with the general and assistant managers of her hotel to discuss how her work schedule would change now that she was a mom.

When she asked to have two 15-minute breaks per day to pump milk for her daughter, she claims the general manager told her no breaks were allowed. She had to stay at the front desk for eight hours straight.

“I told him how important these breaks are; going eight hours without pumping can lead to mastitis and clogged ducts and eventually drying up,” wrote Gossard.

However, her boss told her that he would need to put two people on every shift to cover her desk if she took breaks. She offered to take morning shift so that a manager could cover her desk during the breaks, and the general manager said he would speak with the owner of the hotel about that.

“How unfair is that? I bring a beautiful baby into this world, want to feed her the best way I can and in return get fired from my job!”

Ironically, Gossard was fired during World Breastfeeding Week. She has shared her story on social media in an effort to bring attention to an action she sees as not just unjust, but illegal.

The Affordable Care Act requires businesses to provide breaks and a private room for mothers to pump breast milk. Businesses with fewer than 50 employees are exempt, but only if providing the accommodation would “impose an undue hardship.”

"It seems like a blatant violation of that law," said Richard Schall, a Moorestown attorney who specializes in employment law. He is unaffiliated with the case.

He explained: "The key word is 'undue.' Yeah, it might be a hardship, it might be an inconvenience, but that's what the law requires."

It is not clear how many employees the Hampton Inn has, but Gossard says she was not asking for a burdensome accommodation.

"It's the manager's job to cover shifts when needed and for 15 minutes, they could've done that," she told NJ.com. "They could've worked with me. They didn't even try to accommodate me any bit, move me to a new position, nothing."

In fact, Gossard pointed out that another Hampton Inn in Indianapolis was actually featured on WomensHealth.gov, which is run by the federal government’s Office on Women’s Health, as an exemplary workplace for nursing mothers.

“We provide lactation support for our mothers here at the hotel should they need,” said Lisa Wiggers, general manager of the Indiana hotel, in a video on the website.

“Why wouldn’t a business do this?” Wiggers added. “It seems just to be common sense that you would care and support for your staff, staff that come to work faithfully every day.”