Breastfeeding in a pornographic age 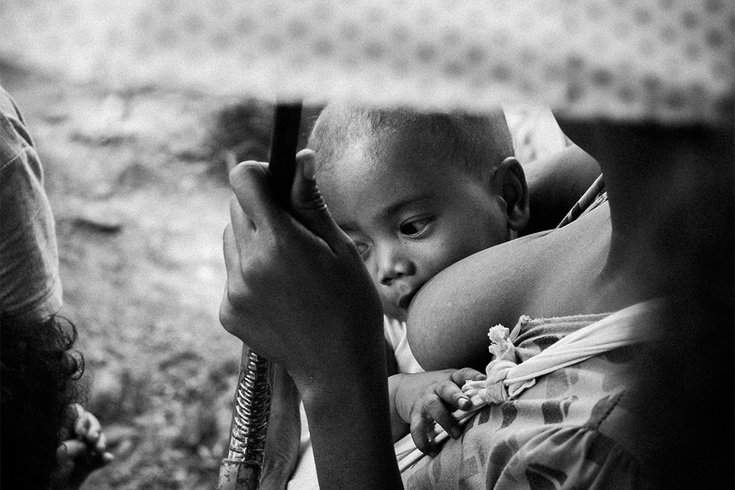 Photo by Eibner Saliba /on Unsplash

We live in a pornographic age.

We live in a pornographic age. Just ask anyone with a cellphone.

They sit at a streetside café. Husband, wife and hungry baby take a needed respite. With shopping bags at their feet, the smell of coffee and a late summer breeze offers soothing balm to frayed nerves.

The fussy 10-month-old pulls at her mother’s shirt.

“Here?” the husband inquires, glancing at people passing by. “Really?”

A waitress takes their order. Refreshing water with ice is brought to the table. The husband reads headline news on his iPhone. They sit in silence. Leaves rustle above them. People walk by. No one stops to stare; very few even glance their way. Mother and child quietly enjoy an oxytocin-induced calm.

Suddenly, a nearby dog barks. The child unlatches, startled.

The husband glances up to see his wife’s milky, white breast exposed.

It’s not really a question; it’s a command. This time, the wife doesn’t shift her gaze. Bringing their daughter back to her breast, she looks at her husband directly.

“Nope,” she replies. “I’m surprised this offends you.”

Her heart beats quickly and she braces herself. But no further comment is made. Eventually, the tension dissipates.

A small child’s eyelids softly close as she continues to nurse.

Clearly, we collectively embrace a pornographic narrative that asserts a woman’s worth is equal to her capacity to sexually stimulate and/or be roughly penetrated. As University of Texas professor of journalism Robert Jensen notes, pornography reduces a woman to “three holes and two hands.”

Despite the fears and harassment described above, despite the tensions regarding pornography and/or breastfeeding present in our most personal relationships, things are changing.

“Isn’t he a little old to be nursing?” a man once curtly asked me.

My son was 13 months old at the time.

“Not at all,” I replied. “In fact, his pediatrician recommends that he breastfeed until he is at least 2. Did you know that the World Health Organization says 2 years is the minimum length recommended?”

We looked at each other. He looked at my son blissfully oblivious. Then, he returned to minding his own business.

In my three-and-a-half-year-long journey as a breastfeeding mother, that is the one “negative” experience I’ve had while breastfeeding in public, sans cover. Yet, I am aware that mine is not the experience of many.

Author and lactation consultant Wendy Wisner recounts the pain of being shamed by an older woman for breastfeeding her 6-month-old. She reflects:

“…no anger, righteousness, or rationalization can give me back the innocence that was robbed from me when that woman harassed me for nursing my baby. And I’m not the only one. Women are harassed daily for breastfeeding. Some incidents are reported; most aren’t. And many, many women simply don’t breastfeed in public because they know how vulnerable they are to such harassment.”

Somehow, the exposure of breasts independent of a sexual narrative based on conquest provokes anger. Somehow, the image of a woman breastfeeding her child in public triggers a need to condemn, ridicule or harass.

Fear of harassment only increases as a breastfeeding child ages. So thoroughly awash are we in the hypersexualization of the female form that it’s nearly impossible for an American to see a mother breastfeeding a 2-, 3-, or 4-year-old and not throw sexual associations into the mix. What if the child remembers? Will breastfeeding turn a little girl into a lesbian? (Yes, people have really asked mothers this question.) Is the mother only breastfeeding for pleasure?

Despite the fears and harassment described above, despite the tensions regarding pornography and/or breastfeeding present in our most personal relationships, things are changing.

Yes, our culture fuels a multibillion-dollar-a-year business built upon the exposed flesh of women while too often shaming mothers who nurture, love and publicly breastfeed. Nonetheless, there is a growing movement to challenge such blatant sexist hypocrisy. From World Breastfeeding Week, to nurse-ins, breastfeeding mothers and their supporters are boldly and bravely reclaiming the right to both breastfeed to full term and to breastfeed openly, free of harassment.

Steadily, we wrest power from advertisers and pornographers who would have us believe a woman’s breasts are solely objects of sexual pleasure and a woman’s worth is narrowly defined by her sexual availability.

Through breastfeeding, we remind ourselves, and help teach our children, that connection, kindness and love are the qualities of worth in this world. We assert that the bodies of women carry multidimensional meaning. Just as a mother responds to the cries of her breastfeeding child, so too, do we respond to the pain in our culture resulting from pornographic disrespect, abuse and a sexist double standard.