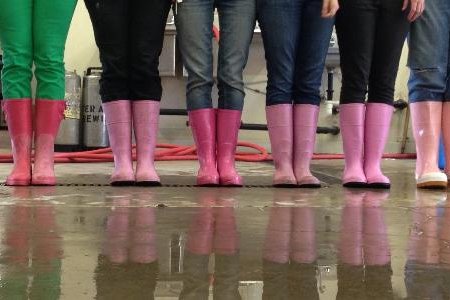 It’s no secret that the art of beer brewing in Philadelphia and beyond is a male-dominated field, though Philly is full of innovators combating the stereotype.

West Philly’s own Dock Street Brewing represents one of the rare female-owned breweries throughout the nation, and in 2015, Philadelphia instituted its own chapter of the Pink Boots Society, a group dedicated to the support of women working in the beer industry.

The Pink Boots Society is made up of not only beer brewers and fermenters but is also open to brewery owners, servers, writers and just about any other woman working within the vast corners of the industry.

This Sunday, the Pink Boots Society is making its way to Philadelphia for the Women in Brewing Symposium, a day of seminars and beer samples culminating in a meet and greet at City Tap House University City.

“The Pink Boots is about empowering and educating women and bringing to light some of the difficulties that women face in the industry as opposed to our male counterparts,” Erin Wallace, president and founder of Pink Boots Society’s Philadelphia chapter, said in a statement.

“Some people don’t think we could do the physical job that men do, carrying sacks of grain, for example. We also want to bring to light some of the sexism in beer advertising and how women have been sexualized.”

The program will start at 11 a.m. at the University of the Sciences and includes presentations by local and visiting Pink Boots members. Local panelists include Colleen Rakowski, head of the barrel room at Free Will Brewing, and Aimee Garlit, a technician at Dogfish Head Brewing.

Tickets to the event – which is open to both men and women – start at $15 and are available for purchase here. All proceeds will benefit women’s advancement in the brewing industry.